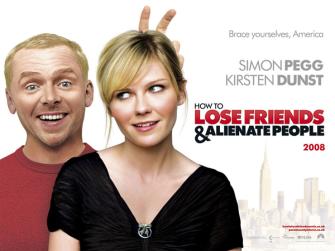 Right around the point horn-dog magazine writer Sidney Young (Simon Pegg) is frantically scouring a fancy garden party for cocaine so he can take advantage of the dim-bulb starlet (Megan Fox) he's been fervently stalking, the putrid showbiz comedy "How to Lose Friends and Alienate People" appears to hit Defcon 5 in mistaking its brand of moral laxity for cutesy irreverence.

When Sidney's scheme is thwarted by the screenplay's need to have him do the right thing and safely drive home his drunk, depressed and lovelorn co-worker Alison (Kirsten Dunst), you then worry for her safety in such loutish hands. And she's the one we're supposed to root for him to win over.

Ostensibly a rom-com reorganizing of British author Toby Young's 2001 satiric memoir about the self-sabotaging, cheeky swath he cut through his brief celebrity journalism career at Vanity Fair, the movie version, scripted by Peter Straughan, drops its surrogate into a soul-imperiling scenario at the fictional rich-rag Sharp's: Will Sidney cozy up to celebs or be allowed to take them down in print? (And can he do both?)

But when it's not turning the real Young's escapades -- ordering a stripper to a colleague's office on Take Our Daughters to Work Day, or asking a musical comedy star upfront if he's Jewish and gay -- into lifeless comic bits, it appropriates everything else from "The Devil Wears Prada," "The Apartment" or the Farrelly brothers. It leaves the whole affair derivative, tone-deaf and garishly unfunny. Pig urine and transsexual genitalia gags jostle for position alongside forced slapstick, dumb one-liners and the film's only (unintentionally) humorous material: the disingenuous sentimentalizing of "glossy posse" outsiders who deplore what they've become after they work to acquire their every desired perk.

Director Robert Weide, whose stewardship of the TV series "Curb Your Enthusiasm" indicated an understanding of hostile laughs, can't make up his mind whether the fame-grubbing Sidney is a principled jerk, an immature closet romantic or Jerry Lewis. He's impossible to follow as a protagonist, much less care for, and the rubber-faced Pegg -- normally good at wiry slacker charm -- throws everything at the wall to little effect.

Dunst's frustrated novelist, meanwhile, is more believable when she calls Sidney "loathsome" in the first half than when affixing a moony stare at him in the second. And Danny Huston and Gillian Anderson, as a sleazy editor and icy power publicist, respectively, hit their marks with expected professionalism. But only a curtain-haired, cigarette-smoking Jeff Bridges as Sharp's impresario Graydon Carter -- I mean, Clayton Harding -- intriguingly connects institutional bitterness with A-list gatekeeping. His dismissive tossing of a crudely sloganed T-shirt of Sidney's out of a top-story window is the movie's funniest gag, and somehow acts as its perfect critique too.

Directed by Robert Weide; written by Peter Straughan, based on the book by Toby Young; photographed by Oliver Stapleton; edited by David Freeman; music by David Arnold; production design by John Beard; produced by Young, Laurie Borg. A Metro-Goldwyn-Mayer release.

About "How to Lose Friends & Alienate People"

How To Lose Friends & Alienate People is directed by Oscar nominated Robert Weide and produced by Oscar nominated Stephen Woolley and Elizabeth Karlsen. The Stephen Woolley/Elizabeth Karlsen/The Number 9 Films production was developed as part of the UK Film Council's slate funding initiative with Film4, the Irish Film Board, Intandem Films and Audley Films. It is based on the bestselling memoir by Toby Young and the screenplay is by Peter Straughan. The cast is led by Simon Pegg (Hot Fuzz, Shaun of the Dead), Kirsten Dunst (Spider-Man trilogy, Eternal Sunshine of a Spotless Mind, Bring It On), Danny Huston (The Constant Gardener, 30 Days of Night), Gillian Anderson (The X-Files, The Last King of Scotland), Megan Fox (Transformers), Max Minghella (Hippie Hippie Shake) and Jeff Bridges (Seabiscuit, The Big Lebowski).

Toby Young reminisces: "Things really didn't work out for me at Vanity Fair, and one of the reasons was that I was just completely naïve about what being a journalist in New York was like. I had seen films like, His Girl Friday and The Philadelphia Story, and I was expecting the corridors of Vanity Fair to be full of these debonair wits, trading wisecracks in-between sips from the hip flask. It was actually this incredibly rule-bound society -- much more rule-bound than the culture I'd come from. We have this idea that America's this great informal place, it's like one giant speakeasy where everyone is completely themselves. But London's quite like that; New York is nothing like that. New York's much more like London was a hundred years ago, and I felt almost like I was Austin Powers who'd come of age in this kind of permissive, swinging '60s era who'd been teleported back in time to the Victorian era."

The memoir was optioned by Film4 in 2002 and Stephen Woolley and Elizabeth Karlsen of Number 9 Films approached both Film4 and Toby Young to produce it. Stephen was drawn to the memoir because, as he says, "in the book he explains why he [Toby Young] is like he is, a pain in the arse, and the self deprecation saves Toby from sheer sleaziness. It's also laugh out loud hilarious!"

Producer Stephen Woolley was aware that there needed to be changes to the memoir to make the transition to film, he comments: "The book is a series of tremendously funny but disconnected events that happened to Toby Young whilst he was working at Vanity Fair in the late 1990s. What we wanted to do was really find a spine to the tale, a romance, so that the Sidney Young not only falls in love with New York but also a character from New York who, like him, realizes that the magazine industry at heart can be corrupting."

Screenwriter Peter Straughan was brought onto the project because Producers Stephen Woolley and Elizabeth Karlsen had liked his script Three Bad Men; he has previously written the screenplay for Sixty Six, which Elizabeth Karlsen also produced, and is currently working with George Clooney on Men Who Stare At Goats. Peter created the character Alison (played by Kirsten Dunst) who works at Sharps Magazine and although she instantly dislikes Sidney Young, begins to warm to his bumbling charm throughout the course of the film.

Toby Young adds: "One of the differences between the story that's told in the film and the real story, is that the film is a romantic comedy and the courtship between Simon Pegg and Kirsten Dunst is kind of cute and funny, and it hits a few roadblocks, then their coming together. In reality, I dated the woman for a while (who subsequently became my wife) and then she dumped me. Then I managed to persuade her to go back out with me, and then she dumped me again. And then I proposed to her and she said, 'no.' And then we went back out with each other and I proposed to her again, and she said, 'I'll think about it.' It literally took me five years of continuous stalking to get her to agree to marry me. And a film that actually, faithfully, recreated that story would be more of a dark psychological thriller than a romantic comedy!"

With a great script, the producers turned their attention to finding the right director. Stephen Woolley, Toby Young and Peter Straughan are great fans of Curb Your Enthusiasm and thought that Robert Weide, executive producer on the film, could bring that same comic sensibility to similar material. Stephen reasons that the director needed a comedy background and Robert was the natural choice, he says: "The most important thing is that this film delivers what it says on the tin: comedy. I thought that if Bob [Robert Weide] can bring half of what he had with Curb Your Enthusiasm we could have a good chance of making people laugh."

Robert Weide had been keen to do the right film for a couple of years and "a few pages into it, I thought, I really want to do this... I was really impressed with what Peter brought to it in that he kept a lot of the anecdotes and then fabricated this new story line, the love story and created new characters out of old cloth that were really interesting. It feels like an original piece in that it is not beholden to the book."