1906: The Forward Pass is Legalized 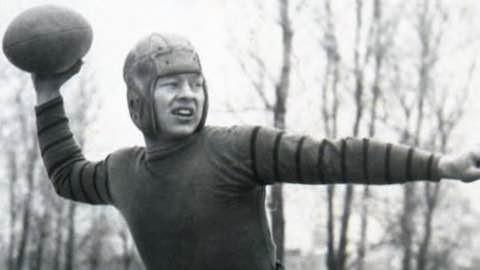 1906: The Forward Pass is Legalized

In 1906 the forward pass was legalized and football has never been the same. But all the aerial activity that has captivated fans for decades had a very modest beginning.

On Thursday, October 25, 1906, the first authenticated pass completion in a professional game occurred when quarterback George "Peggy" Parratt of the Massillon Tigers completed a pass to end DAN "BULLET" RILEY in a victory over a combined Benwood-Moundsville, West Virginia team in a 61-0 decision. The pass was a mere footnote in newspaper accounts of the game, as Parratt's 65-yard run from scrimmage and 100-yard kickoff return seized the headlines.

Earlier that year, on January 12th, rules were passed that forever changed the nature of football as the forward pass was legalized, the length of football games were reduced from 70 to 60 minutes, the neutral zone separating the offense from the defense by the length of the ball was established, the distance required for a first down was increased to 10 yards, and six men were required to be on the line of scrimmage. Because the pros still followed collegiate rules, these changes were just as important to them as to college football.

An early believer in the possibilities of the passing game was Pro Football Hall of Famer CURLY LAMBEAU, who teamed with GEORGE CALHOUN in 1919 to form what is now the Green Bay Packers. Lambeau is one of seven coaches in NFL history to amass 200 wins (229-134-22) and enjoyed an NFL playing career with Green Bay that stretched from 1921-29 and included 24 touchdown passes.

"I always loved to pass," Lambeau said in an interview on the eve of his induction into the Wisconsin Hall of Fame in 1962. "I used to practice passing in the spring. The ball was harder to throw then as it was bigger around. They changed the ball in the early '30s, which made it easier to throw. Our offense those days was 75 percent passing. Other teams passed in desperation while we threw on first down. I'd rather pass. I figured it was the easiest way to pick up yards. Fritz Gavin (former teammate) told me not long ago that he remembers one game I threw 45 passes and completed 37."

Total Passing Yards by Decade in the NFL