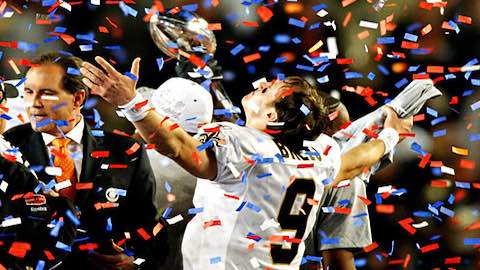 This was the Saints' first Super Bowl appearance and the fourth overall and second appearance in four seasons for the Colts. The Saints were 13--3 during the 2009 regular season, compared to the Colts' 14--2 record. In the playoffs, both teams were the top seed in their respective conferences, marking the first time in 16 years (Super Bowl XXVIII) that both number one seeds have reached the Super Bowl. The Colts advanced to the Super Bowl with playoff round victories over the Baltimore Ravens and New York Jets, while the Saints advanced to Super Bowl 44 with victories over the Arizona Cardinals and Minnesota Vikings.

Peyton Manning and the Indianapolis Colts responded with a 96-yard scoring drive for a touchdown. On the drive, Peyton Manning completed three passes for 35 yards, the last one a 19-yard touchdown pass to wide receiver Pierre Garçon, increasing the Colts lead to 10--0. Colts running back Joseph Addai was the main force of the drive compiling 53 rushing yards on 3 carries, including a 26-yard run to the Saints 23-yard line. Garcon's TD catch came two plays later. This drive tied the record for the longest drive in Super Bowl history.

It appeared as if the Colts were well on their way to an easy Super Bowl victory as the Saints were unable to respond, recording only one first down on their first two possesions.

However, the momentum of the game began shifting in the second quarter. The Saints put their first points of the game after an 11-play 60-yard drive culminated in Hartley's 46 yard field goal. The Saints were fortunate to hold the Colts on the next possession when Garcon dropped a catchable pass on a 3rd down play. The Saints drove the ball all the way to the Colts one-yard line but were unable to score on 4th down when Pierre Thomas was stopped in his tracks for no gain by linebackers Gary Brackett and Clint Session.

Starting from their own one-yard line, the Colts were forced to punt from their own ten-yard line. With 35 seconds remaning in the half, Brees was able to drive the Saints 26 yards allowing Hartley to close out the first half with 44-yard field goal.

The turning point of the game came when the Saints opened the third quarter with an onside kick that caught the unsuspecting Colts off-guard. Saints linebacker Jonathan Casillas recovered the ball on the New Orleans 42-yard line. Brees connected twice with Devery Henderson and twice with running back Pierre Thomas on a 6-play 58-yard touchdown drive. Thomas weaved thru the Colts defense on a screen play right for the 16-yard touchdown to put the Saints ahead 13-10.

Peyton Manning and the Colts offense responded quickly engineering a 10-play 76-yard drive to take back the lead 17-13. Joseph Addai ran right off tackle for 4 yards to cap the drive scoring his first Super Bowl TD. The Saints countered with an 8-play 37-yard drive which culminated in a Garrett Hartley third field goal (47-yard) of the game to the narrow the gap 17-16.

The Colts responded with a drive to the New Orleans 33-yard line, only to have Stover miss a 51-yard field goal attempt early in the fourth quarter, giving giving the New Saints Orleans excellent field possession.

Brees led the Saints on another touchdown drive featuring seven different players getting the ball. The Saints scored with 5:46 remaining in the game when Brees connected with tight end Jeremy Shockey on a two-yard slant to put the Saints ahead for good 24-17. The Saints sealed the victory when cornerback Tracy Porter intercepted Peyton Manning's pass with 3:21 remaning, returning it 74 yards for a touchdown to put the Saints ahead 31-17. The Colts drove deep in New Orleans territory one last time, but stalled inside the five-yard line. Porter also had intercepted Brett Favre to force overtime in the NFC Championship game. The interception was the game's only turnover.

A huge key was the Saints ability to keep Peyton Manning and the Colts offense off the field during the second quarter as New Orleans' time of possession was 12 minutes and 26 seconds.

Peyton Manning wound up with 33 completions in 45 attempts for 333 yards, one touchdown, one interception and an 88.5 passer rating.

Colts running back Joseph Addai rushed for 77 yards and one TD on 13 attempts plus 58 receiving yards on 7 catches. 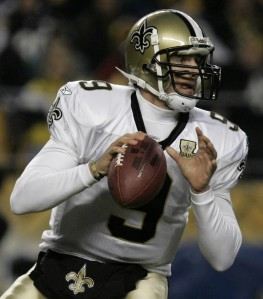 After the game, Brees said, "Four years ago, who ever thought this would be happening when 85 percent of the city was under water? Most people left not knowing if New Orleans would ever come back, or if the organization would ever come back. We just all looked at one another and said, 'We are going to rebuild together. We are going to lean on each other.' This is the culmination in all that belief."