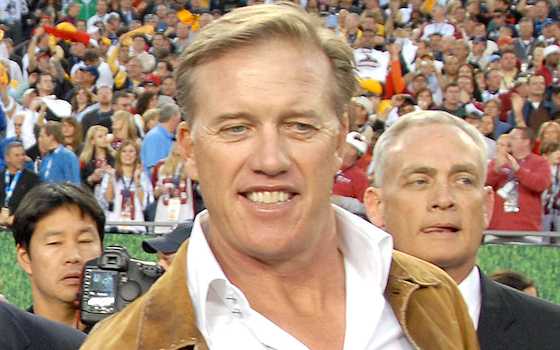 John Elway won two Super Bowls, earned one NFL MVP and made nine Pro Bowls as a Hall of Fame quarterback for the Broncos (1983-98). After retiring, he lost millions of dollars in MVP.com, an online sporting goods store he tried to start with fellow icons Michael Jordan and Wayne Gretzky.

He was CEO and owner of Denver's Arena Football League team, the Colorado Crush, until the league folded in 2009. In that span, he tried to found another internet startup, which he was later forced to sell.

A profile of Elway in Tuesday's Washington Post revealed that the 53-year-old's post-playing career was turning into a series of financial missteps before he was hired as Denver's executive vice president of football operations in 2011.

Since, he's helped transform the Broncos from a franchise void of direction into a Super Bowl team with arguably the best offense in NFL history. In 2011, he helped Broncos coach John Fox tailor his system around quarterback Tim Tebow, a passer so woeful that he was out of the league by 2013.

When he realized the divine touch of Tebow couldn't lead the Broncos to the Super Bowl, he recruited Peyton Manning, taking a chance on a quarterback in his mid-30s who was coming off a neck surgery that would likely decrease his arm strength.

Unlike Gretzky and Jordan, former players who tried unsuccessfully (or are still trying) to run franchises in their respective leagues, Elway, who was born in Port Angeles, WA., and attended Pullman High School while his father, Jack, coached under Jim Sweeney at Washington State, is making a name for himself as a front office whiz.

Elway's rise might be the most compelling narrative for a Broncos team that has taken the politically correct approach in the week leading up to Super Bowl XLVIII. Here's what the national press is saying about Denver.

ESPN.com Tuesday pegged Seahawks RB Marshawn Lynch v. the Denver run defense as the "Matchup to Watch." The Broncos ranked 10th in the NFL in rushing yards allowed and only allowed one running back to surpass 100 yards on the ground during the regular season. Lynch, meanwhile, has exceeded the century mark in four of his six playoff appearances.

It's easy to joke about Manning yelling "Omaha" or "Montana" when he audibles or fakes changing the play at the line of scrimmage. However, it's been a nuisance to Fox and Manning because neither want to provide hints to opposing defenses about their signals.

Broncos WR Demaryius Thomas said he won't mind getting hit by the Seahawks No. 1-ranked pass defense. WR Wes Welker, meanwhile, said he would try to play in the Super Bowl if he sustained a concussion.

Manning was asked about his legacy during Denver's media session. He said it isn't appropriate to talk about somebody's legacy until they are 70 years old.

Earlier this week, Denver CB Dominique Rodgers-Cromartie said he might retire if the Broncos win the Super Bowl. He said it was all a misunderstanding. His message, one former University of Washington coach might say, got misconstrued.