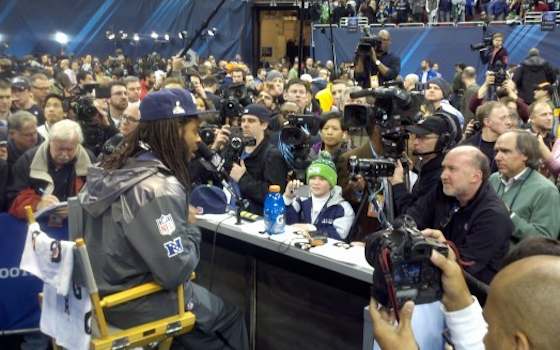 Richard Sherman was the most popular dude in Newark / Art Thiel, Sportspress Northwest

Seahawks RB Marshawn Lynch is to circumspection what comedian Lewis Black is to rage, yet there was a smattering of truth in what the former said at Super Bowl Media Day

The awkward comedy of the Super Bowl's annual clown-car event -- how many media types can you cram into America's consciousness? -- was in full Beast Mode Tuesday afternoon when Marshawn Lynch showed up and made it into Least Mode.

The Seahawks running back, elusive professionally and personally, ambled into and out of the American sports spotlight in about six minutes. Unharmed.

Looking up through sunglasses to the upper deck of the Prudential Center arena in one of America's most economically battered cities, he saw a few thousand fans looking back at him.

Each side stared at the other with the eyes of trout in a fry pan.

"They come to watch people get interviewed?" Lynch said, neck craned. "This is amazing right here."

Hard to say what is more astonishing: That the NFL had the chutzpah to ask for money, or that people were foolish enough to pay it.

Nearly as surprising was that Lynch, who is to circumspection what comedian Lewis Black is to rage, showed up. Lynch studiously avoided all interviews this season until the NFL threatened him with a $100,000 fine if he didn't fulfill his contractually obligated duties to patter with the press.

Many speculated that Lynch would bail on this most overwrought of media traditions. But he shuffled in with his teammates, the more popular of whom had elevated, amplified podiums. Aimed at Richard Sherman appeared be the combined video recording inventory of Sony/Nikon/Samsung.

But Lynch and the less-renowned were on the arena floor perimeter, behind a low barrier fence that forced reporters to strain against it and each other as they leaned for the leanest of wisdom.

Asked why he was so uncomfortable doing interviews, he said, "You taking it wrong. It don't make me uncomfortable. I'm just about actions. You say, ‘Hut!' and that's action. All this unnecessary talk don't do nothin' for me.

"I appreciate people wanting to hear from me. My fans love me regardless. They love the Seahawks. They ain't worried about what I got to say. They just want t0 make sure I show up to perform."

In his bemused, West Oakland indifference lies a significant amount of truth. As with Arnold Schwarzenegger in "Terminator," Lynch is an action hero for whom less dialogue makes for a more remorseless anti-hero and a better movie.

Then, looking at the dozens of inquisitors, Lynch struck truth again.

"You know you don't like it, either," he said. "They be throwing you in here.

With that, Lynch smiled, said his thank-yous and slid away under the grandstand to wait out the final 54 minutes of the one-hour obligation.

In Lynch's world, the media game holds no intrigue. Yet he can be close friends with fullback Michael Robinson, whose video work with the Real Rob Report is a marvelous YouTube collection of candid video insights into the Seahawks locker-room doings.

"Rob is big time, he enjoys that kinda stuff," Lynch said earlier. "Rob is a mentor for me. He knows a lot about the the game, and plays with passion. That's big for me."

In personality and demeanor, the two could hardly be more different. Yet it's obvious watching them interact over the past two seasons that there's genuine affection. In a plain way, they don't have to be like each other to like each other.

It says volumes about both. Lynch doesn't have to "get" the media-driven world to get along, and Robinson feels no need to preach to Lynch about the virtues of cooperation in a side activity irrelevant to Lynch's penchant for action.

The relationship is representative of a theme that echoed around the hall Tuesday in the Seattle hour -- men having success and enjoying one another. As I wandered about dropping in on conversations, I was struck by how often I heard the word "fun" as players described to a national and global audience what makes the enterprise different.

Coach Pete Carroll has created a work atmosphere that is intense and efficient without being overbearing and stifling. As long as work gets done and people and rules are respected, players are free to be themselves.

That doesn't mean that everyone gets along and there are no arguments, fights, jealousies and resentments. Doesn't mean that some won't smoke pot and others will cut corners by using Adderall.

Deviation from the norm is a part of nearly every workplace, every school, every family. The question is whether the greater good can be served by getting beyond pettiness.

At 15-3 and a step away from being Seattle's first major pro sports championship in 35 years, it would seem the Seattle Seahawks are progressing well.

Carroll is willing to indulge the line that Lynch draws.

"He doesn't feel comfortable in settings like this," he said. "He doesn't like to do things he's told to do. Fortunately, that hasn't been a factor for our football team.

"In this setting, he becomes something of a recluse. He doesn't want to be part of it. We try to respect him as much as we can."

In blending together successfully black and white, faithful and secular, country and urban, the Seahawks are getting dangerously close to nailing it, largely through a high value placed on respect.

And if it remains hard to grasp Lynch, think of it this way: It's possible to not like shopping and still enjoy Christmas.