Russell Wilson was Too Short for Broncos 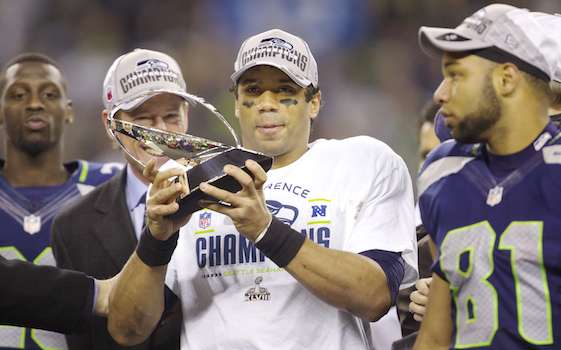 Russell Wilson had a chance to be the heir to Peyton Manning until he came up short.

In a story on ESPN, Broncos executive vice president of football operations John Elway revealed that Denver wanted to select a quarterback in the 2012 NFL draft that could succeed Peyton Manning after he retires, presumably in a few years. By the second round, the club had whittled their options to two: Wilson and Arizona State quarterback Brock Osweiler.

They chose Osweiler, a 6-foot-8, 240-pound pocket passer who verbally committed to play basketball for Gonzaga as a freshman at Flathead High School (Kalispell, MT), then changed his mind before his junior year. Osweiler went on to star for the Sun Devils in football. As a junior at ASU, he threw for 4,036 yards, 26 touchdowns and 13 interceptions. Following the season, he declared early for the NFL draft.

According to ESPN, Elway loved everything about Wilson -- athleticism, attitude and ability to extend plays -- but went with Osweiler because he was younger (21). Elway said he thinks that quarterbacks need size to succeed in the NFL.

Their respective rosters officially list Osweiler at 6-foot-7 and Wilson at 5-foot-11, but in person their height difference is likely closer to a foot. For Elway, apparently, that made the difference.

Osweiler might have to wait a few more years before he has the chance to compete for the starting gig. Sunday Manning, 37, spoke like a quarterback that wasn't ready to retire should he beat the Seahawks in Super Bowl XLVIII.

It isn't New York City, but that doesn't mean the state of New Jersey isn't rolling out the red carpet. Literally. The Seahawks walked on one when they exited their plane at Newark City airport.. Meanwhile, the Broncos media headquarters is aboard a 210-foot luxury cruise liner called the Cornucopia Majesty. It's parked just off Jersey City's mainland and has a nice view of the Statue of Liberty.

Despite being the fourth youngest team in the NFL and the second youngest to play in the Super Bowl, Seahawks coach Pete Carroll thinks the Seahawks are well-suited for the spotlight that accompanies Super Bowl week. All season, Carroll and each player, almost to ad nauseum, said that each week was a championship opportunity. The philosophy isn't changing.

Seahawks CB Richard Sherman was the subject of a lengthy feature by author Ben Shpigel in the Sunday New York Times. Among other things, it explains through Sherman's family and former teachers how his Compton, CA neighborhood was riddled with gang-violence. It also provides a glimpse into how Sherman's near-photographic memory allowed him to thrive in school and on the football field. Also, Sherman not saying anything controversial Sunday was news.

ESPN analyst John Clayton released his Super Bowl hype column detailing the 10 story lines that will likely dominate during the week leading up to the game. Number two is how Seahawks RB Marshawn Lynch will treat the media. Lynch was fined $50,000 by the league late in the season for refusing to speak with reporters once a week, a stipulation that his contract requires him to abide by, though it was later held in abeyance as long as Lynch speaks with the media the rest of the season.

Sports Illustrated's Audibles blog came out with a position-by-position breakdown of how general manager John Schneider and Carroll built the Seahawks into a Super Bowl team.

Super Bowl XLVIII - Russell Wilson was Too Short for Broncos