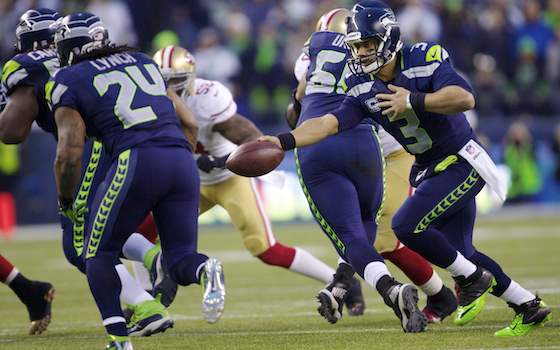 In their first full practice of Super Bowl week, the NFC champion Seahawks worked at a mostly breakneck pace for 90 minutes on the artificial turf inside the New York Giants' indoor facility and opened five doors around the building attempting to simulate the temperatures they're likely to feel Sunday. The temperature outside midway through practice: 22 degrees. Inside: 36, a few degrees off the projected temperature at kickoff for Super Bowl XLVII Sunday night.

Seattle had only one player of 61 on the regular roster and practice squad who did not work during the unpadded practice at the Quest Diagnostics Training Center: running back Marshawn Lynch (knee). But that's not unusual, coach Pete Carroll said after practice. "Everybody's fine," Carroll said. "This is the day we rest Marshawn. Wednesday is always a rest day for him. We've been doing that for years, and it's always worked out great. We're in great shape. We're just as fortunate as can be to be in this kind of shape this late in the year."

Lynch was in good spirits throughout the practice, at one point acting as a half-speed cornerback as Russell Wilson put the offensive first unit through its paces. Lynch spent a couple of minutes talking to club owner Paul Allen and GM John Schneider, who watched practice together from the sidelines. The other three players who had been questions marks after the NFC title game 10 days ago all practiced without limitation on Wednesday. Wide receivers Doug Baldwin (hip) and Percy Harvin (concussion) both ran freely, and Baldwin cut especially well on his pass routes. Defensive tackle Brandon Mebane (ankle) worked without a limp and ran well.

Unlike many teams, who run first units against the scout team predominantly during a practice week, Carroll likes to use part of Wednesday practices working the best against the best. That's what he did on this day, keeping practice the same for the Super Bowl as it was in week three. Practice was fast and competitive. Wilson threw a red-zone touchdown pass early in such a competitive period; later, cornerback Richard Sherman had an athletic interception. Jousting was constant between receivers and the defensive backs. As usual, Seattle practiced with loud music, a blend of James Brown soul and Notorious B.I.G. hip-hop, for the entire practice.

Carroll said he was happy with the indoor field and the footing his players were able to get.

"The turf out there is somewhat frozen, and the turf in here is good," Carroll said, explaining why he chose to work inside for the late-afternoon practice. "And if we could get the temperature anywhere near what it will be Sunday—it could be anywhere from the low twenties to the mid-thirties—that's what we wanted. And it's supposed to be about 36 in here, maybe a little lower right now. It's close to what we'll have Sunday."

He said he anticipates practicing outside in the next three days "only if we need to. But I thought today we got the conditions just right.

"We had great tempo," Carroll said. "The attention to detail was there … It was great work. You could tell how we carried it through all the way till the end of the practice. I was happy with what we did."

The Seahawks made the nine-mile trip from their hotel in nearby Jersey City late Wednesday morning to the complex where Super Bowl XLVIII will be played Sunday night. The team spent the entire afternoon at the Giants' Quest Diagnostics Training Center, and had offensive and defensive and special-teams meetings, a walk-through practice, lunch and then the regular practice before busing back to Jersey City shortly after 6 p.m.

Seattle will resume practice Thursday here with another closed 90-minute session scheduled to begin at 4:30 p.m.