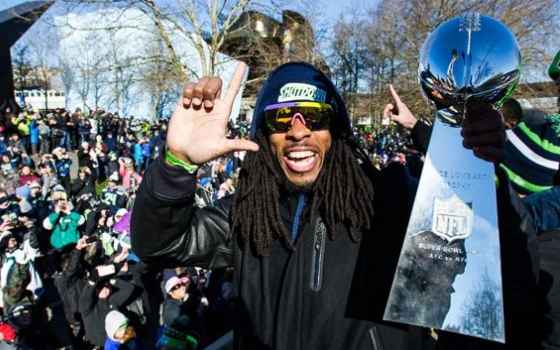 Every sports market deserves one. None of them will do it like Seattle did Wednesday.

So cold that seals shivered. So warm that cops cried. So compelling that Pete Carroll, king of the run-on sentence, was nearly at a loss.

"There's not enough words to describe the emotion, the exchange," he said. But true to his mantra, "always compete," he tried.

"The consistency of the intensity of the fans along the route was amazing," he said, talking to reporters after a final ceremony on the home field. "The frustrating part was not being able to touch everyone and feel the gratitude we have … I can't imagine one better than than that (celebration) -- that was over the top."

Police estimated 700,000, Seahawks owner Paul Allen said nearly a million. But measurement was not about quantity. It was about quality. From babies to oldies, happiness raged.

"The thing that struck me was the little kids," Carroll said. "Some were screaming and hollering, some were a little intimidated. But they had this moment, and will remember this connection with their parents."

People who witnessed as youngsters a similar Seattle parade in 1979 will tell you where they stood, which Sonics they saw, how the air smelled and how they met their spouse that day. For a new generation, the same things happened Wednesday.

The sensory richness when thousands share a common delight at the same moment is not to be forgotten. In 2064, a guy will tell a story to his grandkids about how when he was a little boy, Brandon Mebane smiled at him. Another will describe how his cheeks felt when Marshawn Lynch hit them with Skittles. A woman will giggle telling about the time she and Richard Sherman made eye contact, and he winked at the little girl.

They all will remember, man, was it cold. Some lasted hours in it, a living, pulsing REI catalog flowing through downtown. It just enhanced the adventure.

The processional was late, slow and a shocker for players and fans alike. Neither was quite ready for the other. Some fans came from Alaska, others from Canada, Montana, Idaho, Oregon. There was the guy who walked from Bellevue over the I-90 bridge. Some slept in tents on Fourth Avenue concrete.

The crowd was a lot like the Seahawks roster -- from many places. Only WR Jermaine Kearse is homegrown, from Tacoma's Lakes High School and the University of Washington. Can we have a 253 amen for the brother who broke five tackles on the way to a Super Bowl touchdown?

The Seahawks have the biggest geographic monopoly in the NFL, which helped cause every single downtown hotel room to be sold Tuesday night. Lots of people in the region, in the soon-to-be-immortal words of Lynch, are all 'bout that action.

That's why what the Seahawks have done has value beyond a sports trophy. Seattle is drawing thousands of technology workers from around the country and the world. Did you hear that Microsoft's new CEO is from India?

There are so many new people here who came for the jobs and have only minimal social connections. Seahawks success provides a universal touchstone for people who need to talk about something besides the next app -- even if they don't exactly know that's why they care about Golden Tate's yards after catch.

Same with the Sounders.

The international appeal of soccer directly connects to the thousands of tech workers whose ethnic heritages reserve a prominent place for futbol. Think about it: The Seahawks and Sounders lead their sports in ravenous consumption by home fans. It's not the coffee.

But that explains only a part of Wednesday's roaring conflagration of passion. The biggest part is the long-timers here who have endured 35 years of drift between heartbreak and squat.

Don't think for a minute that the Super Bowl triumph makes up for the championship drought. No way. No pro sports market should have to endure that kind of wretched return for the investment of tax dollars in facilities and investment in tickets and adrenaline.

What the Seahawks success does, is prove it can be done in Seattle. Long burdened by the belief that teams cannot succeed here because the geographic isolation is a turnoff to premier veteran free agents, Seattle and a championship turns the belief into mythology.

Among many who deserve credit, three stand out and were present Thursday: Allen, who saved the team, Carroll, who remade it, and quarterback Russell Wilson, who ignited it.

The one guy who should have been there was former Seahawks CEO Tod Leiweke, the connective tissue for the success and the best sports executive Seattle has known.

Carroll deserves special mention here. The most remarkable aspect of the season was that the team kept getting better while working around injuries and suspensions. Remember all the hand-wringing in December about modest production from the offense? The Seahawks plowed through two good NFC teams in the playoffs and put up 43 points in the Super Bowl.

They became even better in the two weeks prior to Sunday. FS Earl Thomas said the Seahawks went "through the roof" in unity of purpose during meetings and practices that led to the blowout.

"We talked about that Tuesday," Carroll said of a team meeting. "We got better throughout the Super Bowl process. We got better the first week and got better the second, even with the distractions that people say throw you out of whack. We seemed to zero in even better.

"It was perfect; exactly how it was supposed to go."

Think about that last statement. How many times in any of our endeavors can such a thing be said?

That is why 700,000 people endured 10-degree windchill: They wanted to celebrate a thing that went exactly as it was supposed to go. A fairy tale came true.

Super Bowl XLVIII - The Seahawks and The Fairy Tale