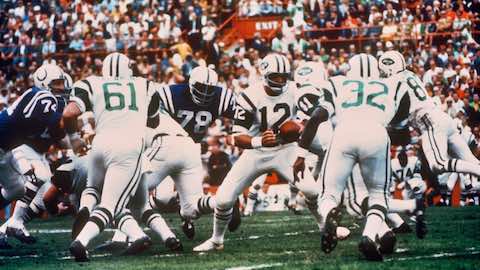 New York Jets quarterback Joe Namath "guaranteed" victory on the Thursday before Super Bowl III, then went out and led the AFL to its first Super Bowl victory over a Baltimore Colts team that had lost only once in 16 games all season.

QB Joe Namath, chosen the outstanding player, completed 17 of 28 passes for 206 yards and directed a steady attack that dominated the NFL champions. The New York Jets had 337 total yards, including 121 rushing yards by Matt Snell. The New York Jets defense did its part by forcing 5 turnovers. The Jets' defense had intercepted Colts quarterback Earl Morrall three times in the first half.

The Colts could not generate any points with quarterback Earl Morrall. By the time Shula brought sore-armed Johnny Unitas off the bench in the third quarter, the Colts trailed 13-0. Unitas, who had missed most of the season with a sore elbow, led the Baltimore Colts to their only touchdown late in the fourth quarter after the New York Jets led 16-0. The Jets were in such complete command, Namath did not have to throw a single pass in the fourth quarter. The Jets simply ran out the clock.

At that time, most people felt the NFL was vastly superior to the AFL. Easy victories over the Chiefs and Oakland Raiders in Super Bowl I and Super Bowl II by the vaunted Green Bay Packers only reinforced that belief. The NFL, with roots tracing back to 1920, was seen as the one true professional league. The AFL, born in 1960, was regarded as upstart newcomers.

The brash Namath was honored by the Miami Touchdown Club as its Player of the Year on the Thursday night before Super Bowl Sunday. As he stepped to the microphone, a voice in the crowd -- belonging to a Colts' fan began heckling him and predicting a lopsided Baltimore victory.

Namath replied "Whoa, wait a minute. You guys have been talking for two weeks now [meaning the Colts' fans and the media] and I'm tired of hearing it. I've got news for you. We're gonna win the game. I guarantee it."

Namath's supporters happily applauded his bravado. One thing was certain: come Super Bowl Sunday, they all would be watching. When Namath returned to the hotel, he called cornerback Johnny Sample, the Jets' defensive captain, in his room.

"Joe told me, 'I said something tonight that's gonna be all over the news tomorrow,'" said Sample. "I asked him: 'What the heck did you say?' He told me he guaranteed we'd win the game. I said, 'Man, you didn't say that.' He said yeah, he did."

Jets coach Weeb Ewbank knew nothing of Namath's comments until the next day when he awoke to find the "guarantee" plastered across the front page of the morning paper. Having instructed his players to generously praise the Colts and, if possible, make them even more overconfident, Ewbank was furious. Namath's outburst, he feared, jeopardized everything. 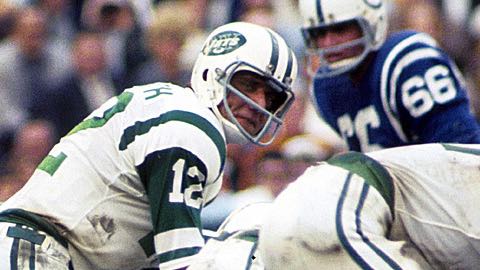 Playing before a capacity crowd at the Orange Bowl, with millions more watching on television, Joe Namath (completing 17 of 28 passes for 206 yards) coolly picked apart the potent Colts. With his quick release, Namath beat the Colts' blitz with quick passes to split end George Sauer (eight receptions, 133 yards). The brash 25-year-old quarterback proved to be every bit as good as advertised -- and much better than the Colts bargained for.

Namath directed the Jets' offense with patience and precision. He mixed his passes with the powerful runs of fullback Matt Snell (30 rushes, 121 yards) as the AFL upstarts took control of the game.

Jets Quarterback Joe Namath might have won the Most Valuable Player award without even throwing a pass. His "guarantee" of victory -- and his determined leadership to back up his boast -- cemented the reputation of the AFL and excited football fans around the country as the upstart Jets defeated the Baltimore Colts of the NFL 16-7 in one of the biggest upsets in sports history.

Namath's famous run off the field after the game, his index finger waving to let the world know who was "No. 1," is one of the enduring images of the Super Bowl. 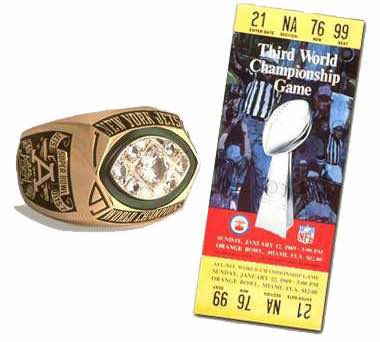