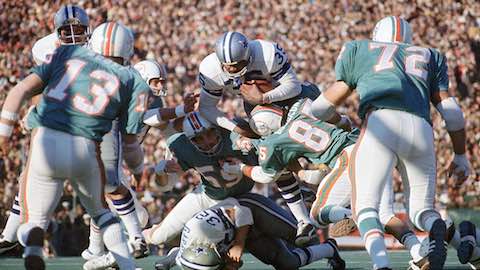 Bouncing back from a devastating Super Bowl V defeat a year earlier, the Dallas Cowboys brought home its first of five Super Bowl titles with a 24-3 win over the Dolphins. Outdueling his Miami counterpart Bob Griese, Roger Staubach found wide receiver Lance Alworth and tight end Mike Ditka in the end zone for touchdown passes. In addition to his 119 yards through the air, Staubach directed the potent Cowboys' rushing game up and down the field in this victory.

The Dallas Cowboys dominated Super Bowl VI on both sides of the ball to defeat the Miami Dolphins 24-3.

On offense, the Cowboys set Super Bowl records for the most rushing yards (252) and most first downs (23). The Cowboys "Doomsday Defense" was even more dominating as they limited the Miami Dolphins to the least total yards allowed in a Super Bowl (185) and the least points allowed (3) while not allowing a touchdown for the first time in Super Bowl history.

Dallas converted Chuck Howley's recovery of Larry Csonka's first fumble of the season into a 3-0 advantage and led at halftime 10-3. After Dallas received the second-half kickoff, Duane Thomas led a 71-yard march in eight plays for a 17-3 lead. Howley intercepted Bob Griese's pass at the 50 and returned it to the Miami 9 early in the fourth quarter, and three plays later Roger Staubach passed 7 yards to Mike Ditka for the final touchdown. Thomas rushed for 95 yards and Walt Garrison gained 74.

After years of struggling to win the big game, the Dallas Cowboys finally won their first NFL championship and Super Bowl title, along with revenge for the Cowboys close 16-13 loss to the Colts in Super Bowl V, by defeating Miami 24-3.

Even though they were the winningest team over the six previous NFL regular seasons, the Cowboys had lost to the Green Bay Packers in the 1966 and 1967 NFL Championship Games, then lost to the Cleveland Browns in the division round playoffs in 1968 and 1969. In 1970, the Cowboys lost to the Colts in Super Bowl V.

After a 4-3 start, Cowboys coach Tom Landry decided that splitting playing time between quarterbacks Roger Staubach and Craig Morton was not working. Landry chose Staubach as the starter and the Cowboys went undefeated the remainder of the NFL regular season and throughout the playoffs.

In the playoffs, the Cowboys defeated the Minnesota Vikings (20-12) and, then, the San Francisco 49ers (14-3) to win their second NFC title.

The Dolphins, in only their 6th season as an NFL franchise, won the AFC East with a 10-3-1 record under Don Shula.

In the playoffs, the Dolphins first defeated the Kansas City Chiefs 27-24 in double overtime, and then, shut out the Colst 21-0 to advance to Super Bowl VI. 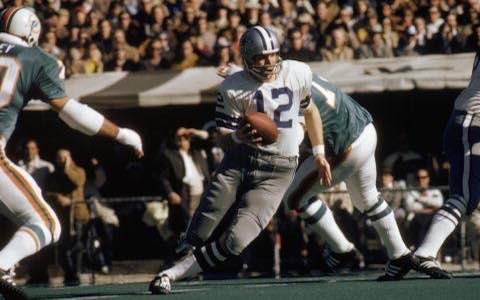 The Cowboys' rushing attack was the driving force in their victory, and quarterback Roger Staubach earned the Most Valuable Player award for directing that attack.

During the regular season, Roger Staubach was the NFL's top rated passer (101.8) as he threw for 1,882 yards and 15 touchdowns with only 4 interceptions. Staubach added 343 rushing yards and 2 touchdowns on 41 carries. 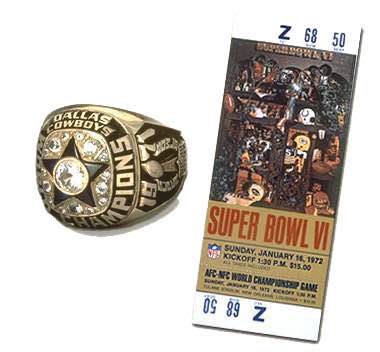