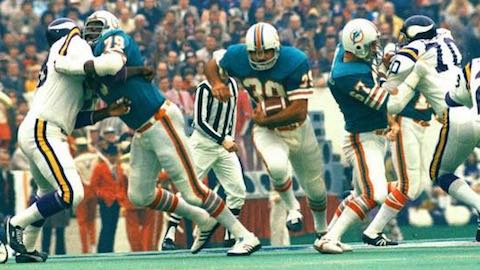 Racking up over 100 yards rushing for two Super Bowls in a row, Csonka's 33 carries wore down the Vikings. The bruising back finished with 145 yards and two touchdowns in Miami's second consecutive Super Bowl victory (24-7). Miami quarterback Bob Griese attempted only seven passes. Minnesota quarterback Fran Tarkenton scampered in for a score in the fourth quarter, but the Dolphins lead was insurmountable because of its steady rushing attack.

The defending NFL champion Miami Dolphins -- representing the AFC for the third straight year -- scored the first two times they had possession on marches of 62 and 56 yards while the Miami defense limited the Vikings to only seven plays in the first period.

Larry Csonka climaxed the initial 10-play drive with a 5-yard touchdown bolt through right guard after 5:27 had elapsed.

Four plays later, Miami began another 10-play scoring drive, which ended with Jim Kiick bursting one yard through the middle for another touchdown after 13:38 of the period.

Garo Yepremian added a 28-yard field goal midway in the second period for a 17-0 Miami lead.

Minnesota then drove from its 20 to a second-and-2 situation on the Miami seven yard line with 1:18 left in the half. But on two plays, Miami limited Oscar Reed to 1 yard.

On fourth-and-1 from the 6, Reed went over right tackle, but Dolphins middle linebacker Nick Buoniconti jarred the ball loose and Jake Scott recovered for Miami to halt the Minnesota threat.

The Vikings were unable to muster enough offense in the second half to threaten the Dolphins.

Bob Griese of Miami completed 6 of 7 passes for 73 yards.

Minnesota quarterback Fran Tarkenton scampered in for a score in the fourth quarter, but the Dolphins lead was insurmountable because of its steady rushing attack. 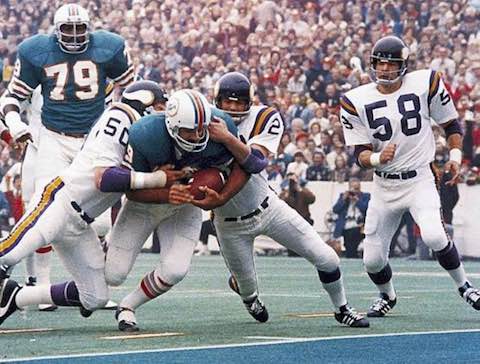 Powerful running back Larry Csonka powered the Miami Dolphins to their second consecutive Super Bowl championship, a 24-7 victory over the Minnesota Vikings.

Csonka carried the ball 33 times for 145 yards, a Super Bowl record at the time. The Dolphins' rushing attack so controlled the game that quarterback Bob Griese attempted only 7 passes.

Csonka's 5-yard touchdown run in the first quarter capped off a 62-yard drive and opened the scoring for the Dolphins. Ahead 17-0 in the third quarter, Miami put the game away on Csonka's 2-yard touchdown run. 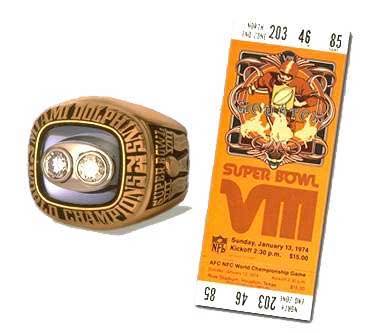