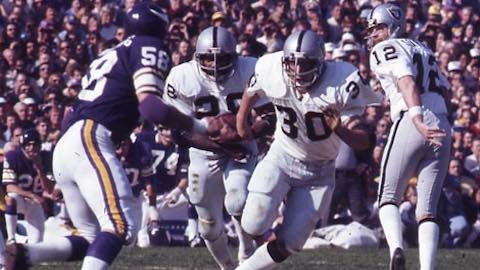 Fred Biletnikoff's numbers weren't overwhelming (four catches, 79 yards), but three of those receptions set up short touchdowns for the Raiders in a 32-14 victory over Minnesota. After jumping out to a 16-0 first half lead, Oakland never looked back.

The Raiders won their first NFL championship before a record Super Bowl crowd plus 81 million television viewers, the largest audience ever to watch a sporting event.

The Raiders gained a record-breaking 429 yards, including running back Clarence Davis's 137 rushing yards.

Wide receiver Fred Biletnikoff made four key receptions, which earned him the game's most valuable player trophy. Oakland scored on three successive possessions in the second quarter to build a 16-0 halftime lead.

Errol Mann's 24-yard field goal opened the scoring, then the AFC champions put together drives of 64 and 35 yards, scoring on a 1-yard pass from Ken Stabler to Dave Casper and a 1-yard run by Pete Banaszak.

The Raiders increased their lead to 19-0 on a 40-yard field goal in the third quarter, but Minnesota responded with a 12-play, 58-yard drive late in the period, with Fran Tarkenton passing eight yards to wide receiver Sammy White to cut the deficit to 19-7.

The 1976 Oakland Raiders had thundered into the Super Bowl with a 13-1 regular-season record and a 2-0 mark in the playoffs. These AFC Champions entered Super Bowl having won 12 games in a row. The NFC Champion Minnesota Vikings -- in search of their first Super Bowl Championship in four tries -- had finished with an 11-2-1 record, then won a pair of playoff games to make it to the finals. The favored Vikings had many veterans of previous Super Bowls on every unit. The Raiders had just four veterans who had played for the the Raiders in Super Bowl II -- running back Pete Banazsak, wide receiver Fred Biletnikoff, cornerback Willie Brown and guard Gene Upshaw, plus linebacker Ted Hendricks who had been in an earlier Super Bowl with the Baltimore Colts.

Raider Owner-Managing General Partner Al Davis had crafted his team with meticulous care. Along with Davis, five of these Raider players would later be enshrined into the Pro Football Hall of Fame--Biletnikoff, Brown, Hendricks, Upshaw and offensive tackle Art Shell. Others including punter Ray Guy and head coach John Madden would be finalists for this prestigious honor.

The two practice weeks leading up to the Super Bowl Sunday had gone extremely well for the Raiders. Physically and mentally this Raider squad would be perfectly prepared to win. In fact, on the Wednesday before the game, riding back from the final "defensive day" practice of the season, Raider executive assistant Al LoCasale told coach Madden, "Unless our team bus turns over going up the canyon to the Rose Bowl Sunday, this one won't even be close."

This belief was rampant among the Raiders. As linebacker Phil Villapiano stated, "We knew by Wednesday we were going to win. The only hard part from then on was waiting for the game." This was a supremely confident football organization with a total commitment to excellence motivating each and every talented wearer of Silver and Black. To this group coming to the Super Bowl wasn't enough, not nearly enough. These Raiders traveled south from Oakland to headquarters in Newport Beach, and play at Pasadena's Rose Bowl for just one reason--to win the World Championship.

Game day was clear and sunny, with the temperature near 60 degrees at kickoff, a slight breeze out of the northwest and every one of the 103,424 tickets in eager hands. The Raiders were in white jerseys, the Vikings in purple.

Ken Stabler smiled after the missed field goal and told coach Madden on the sideline - "No worries, John. There's plenty more points out there for us."

Safety George Atkinson, pound-for-pound the toughest safety in football, broke up a Fran Tarkenton pass intended for Chuck Foreman to doom the Vikings first series. A booming Ray Guy punt of 51 yards after the next Raiders possession pinned Minnesota deep. On third down Tarkenton went long for wide receiver Sammie White, who could find no free space with Willie Brown in perfect tight man-to-man coverage.

But on the next Raider series, danger threatened. On fourth down from the Oakland 34, Ray Guy had his first-ever NFL punt blocked. It was now Minnesota's ball, first-and-goal on the Oakland three-yard line. But no panic for the Raiders. Just dig in and stop ‘em. Play defense. Play tough defense. Play Raiders defense.

On first down, giant rookie defensive tackle Charles Philyaw stopped Chuck Foreman abruptly after one yard. Then, on second down, a wall in white jerseys rose up and stopped Brent McClanahan dead in his tracks. A hit by Phil Villapiano jarred the ball loose, and inside linebacker Willie Hall dove to claim the ball. Raiders' ball on their own three. But not for long.

The Raiders came up on third-and-seven from their six. The play called was "17 Bob Trey 0," with Clarence Davis going off left tackle behind a lead block by fullback Mark van Eeghen. Tight end David Casper blocked down from his spot on the left side. Guards Gene Upshaw and George Buehler pulled behind the line to get in front on "C.D." as he turned up into the hole, broke to the left sideline and sped for 35 yards. The Raiders were one their way to a Super Bowl record 226 yards rushing. Clarence Davis would be the leading rusher with 137 yards and "17 Bob Trey 0" would be the featured play.

Stabler mixed passes and runs artfully as the Raiders moved to the Vikings seven. There, with David Humm holding, Errol Mann drilled a 24-yard field goal down the middle to give the Raiders a 3-0 lead, a lead they would never relinquish this Super Bowl Sunday.

Raider defense was dominating. Three downs and out for the Vikings. Raider ball on their own 36. Stabler opened with a quick out to Cliff Branch for two yards, then 19 yards to Dave Casper. Carl Garrett, in at halfback, cut back inside left end and danced his way for 13 yards. Finally, with third and three on the Minnesota six, Stabler straight back to pass. Fred Biletnikoff split to the right, went downfield, with Viking cornerback Nate Wright in tight coverage. Biletnikoff looked inside, broke sharply to the sideline, caught the perfect pitch from Stabler and was pushed out on the one-foot line.

The Vikings were the NFL's toughest team to score on from in close. John Madden capitalized on Minnesota's aggressiveness by calling a beautifully designed play-action pass on first down. Stabler faked inside, then threw to tight end Dave Casper all alone going left through the end zone. Casper went tall for the high-thrown ball, and the Raiders went ahead 10-0 after 7:50 of the second quarter.

Again, Raider might and muscle gave the Vikings absolutely nowhere to go offensively. Cornerbacks Skip Thomas and Willie Brown totally denied Minnesota wide receivers any opportunity to get open. Again, three downs and out. This time a Super-Bowl-record-25-yard punt return by Neal Colzie put Oakland just 35 yards away from another score. Four plays into the drive Stabler went to Biletnikoff, again split wide right. This time Biletnikoff faked outside, broke into the post and went sliding to the ground to catch a low pass less than a yard from the Minnesota goal line. Pete Banaszak then bulled his way over right tackle for the touchdown. Mann missed the extra point, but the Raiders lead climbed to 16-0, the score as the first half ended. Raider defense had limited the Vikings to just four first downs. Raider offense had outgained the Vikings by more than 200 yards, 288 to 86.

There was no let up for Raider defense as the second half opened. The Vikings could not cross midfield on their first two series. Big John Matuszak stuffed Chuck Foreman for no gain on a third-and-one, forcing Minnesota to punt. Colzie's 12-yard return brought Ken Stabler and the Raider offense on the field on their own 46. Van Eeghen at right tackle for seven. Davis at left tackle for 16. Stabler to Branch for 10. Then Errol Mann kicks a 40-yard field goal. Raiders 19-Vikings 0.

On the next series, a roughing the punter penalty gave Minnesota a life that a defensive holding call on a long-yardage situation kept alive. Tarkenton took advantage of his breaks and finally got the Vikings on the board with an eight-yard pass to Sammy White to cut the Raider margin to 12 points at 19-7. The third quarter ended that way.

Five minutes into the final period, a blitzing Ted Hendricks forced Tarkenton to scramble. Tarkenton threw wildly across the field. Linebacker Willie Hall smoothly cut in front of the intended receiver, intercepted and returned 16 yards to the Raider 46. On third-and-six from midfield, Stabler dropped back, looked the coverage off deep, then hit Biletnikoff breaking open late in the vacant short middle area. Biletnikoff legged it all the way to the Minnesota two, setting up a Raider touchdown for the third time in Super Bowl XI. On the very next play, Pete Banaszak slashed off right tackle, and the Raiders leaped ahead 26-7. The competitive aspects of this Championship Game were now history.

The Vikings kept firing, and the Raiders replied in their aggressive, attacking style. Tarkenton, with the ball on the Oakland 28, fired a short out to the left sideline. Willie Brown, for two decades the finest cornerback in football, proved again that his instincts and reactions were still at the All-Pro level. "Old Man Willie" cut off the receiver's route, drove to the ball, picked it off and headed down the right sideline, flashing by all the Vikings players and coaches as he sped past their now desolate bench.

John Madden cleared the Raider bench to be sure every active player saw game action in the Super Bowl win. The Vikings scored a meaningless touchdown with 25 seconds left in the game. By this time bedlam reigned on the Raider sideline. Defensive giants John Matuszak, Charles Philyaw and others carried Coach John Madden off on their shoulders. The roar of the crowd was deafening. Every proud Raider has his own personal, often highly emotional memory of the finish to Super Bowl XI. Mark van Eeghen remembers "standing on the 50-yard line late in the game, thinking I didn't want to leave the field. I knew that once I left, the glory of our victory would ear off some."

Willie Brown recalls thinking, "How winning this game make up for the other Raiders who came before and didn't have a chance to participate on a winning Super Bowl team. This victory meant not only a lot to me, it meant a lot to the entire Raider organization." 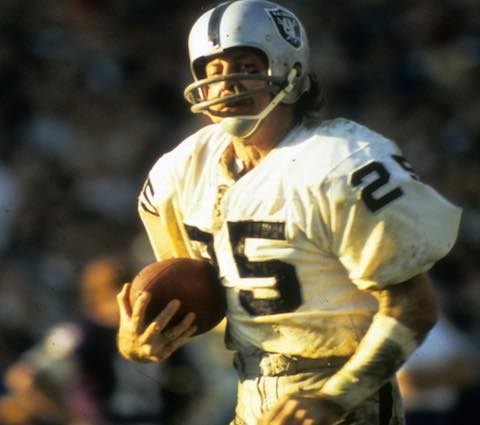 Biletnikoff's numbers weren't overwhelming (four catches, 79 yards), but three of those receptions set up short touchdowns for the Raiders in a 32-14 victory over the Minnesota Vikings. After jumping out to a 16-0 first half lead, Oakland never looked back 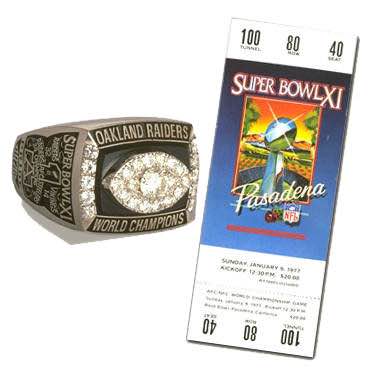