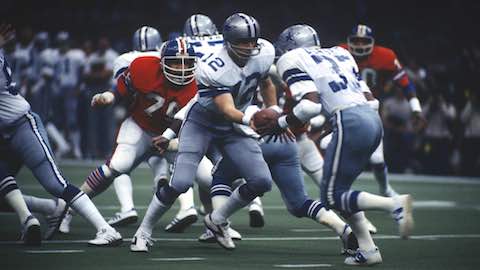 For the first and only time in Super Bowl history, two players shared the MVP award. Randy White and Harvey Martin were instrumental in Dallas limiting the Broncos to only 156 yards of total offense (2.7 yards per play) in a 27-10 win. Dallas' Doomsday Defense forced eight turnovers - four interceptions and four fumble recoveries. White's and Martin's relentless pass rushing also helped force Denver's quarterbacks to finish a combined eight for 24 passing.

The Dallas Cowboys evened their Super Bowl record at 2-2 by defeating Denver before a sellout crowd of 75,583, plus 102,010,000 television viewers, the largest audience ever to watch a sporting event.

In the third quarter Craig Morton engineered a drive to the Cowboys' 30 and Jim Turner's 47-yard field goal made the score 13-3.

After an exchange of punts, Butch Johnson made a spectacular diving catch in the end zone to complete a 45-yard pass from Roger Staubach and put the Cowboys ahead 20-3.

Following Rick Upchurch's 67-yard kickoff return, Norris Weese guided the Broncos to a touchdown to cut the Dallas lead to 20-10.

Dallas clinched the victory when running back Robert Newhouse tossed a 29-yard touchdown pass to Golden Richards with 7:04 remaining in the game. It was the first pass thrown by Newhouse since 1975. 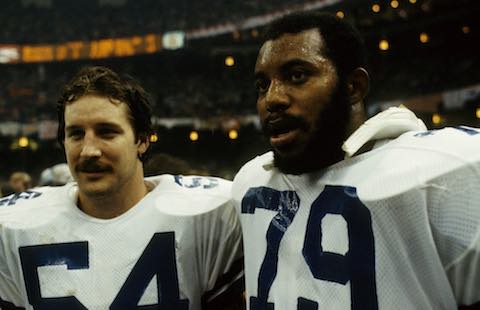 For the first and only time in Super Bowl history, two players shared the MVP award. Defensive tackle Randy White and defensive end Harvey Martin were the leaders of a Dallas defense that forced eight Denver turnovers -- - four interceptions and four fumble recoveries -- in the 27-10 victory. Broncos quarterbacks had only 8 completions in 24 attempts under the fierce Cowboy rush, led by White and Martin.

The Cowboys' "Doomsday Defense" led by White and Martin were instrumental in limiting the Broncos to only 156 yards of total offense (2.7 yards per play) in the 27-10 win.

Halftime Show: "From Paris to the Paris of America" with the Tyler Junior College Apache Belles, Pete Fountain, and Al Hirt 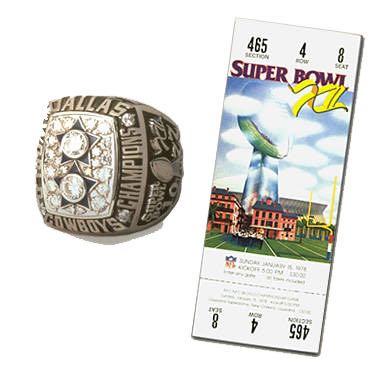