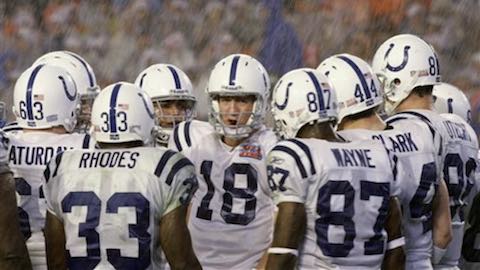 Peyton Manning passed for 247 yards and one touchdown as the Indianapolis Colts defeated the Chicago Bears in Super Bowl XLI. The victory was the Colts' first Super Bowl championship in 36 years. Manning completed 25 of 38 passes, including a 53-yard scoring pass to wide receiver Reggie Wayne in the first quarter. Led by Manning and the Colts' ball-control offense, Indianapolis outgained Chicago 430-265 in total yards and maintained a 38:04 to 21:56 edge in time of possession.

The Colts overcame a 14--6 first-quarter deficit to outscore the Bears 23--3 in the last three quarters.

Devin Hester opened Super Bowl XLI with a 92-yard kickoff return for a touchdown, marking the first time the Super Bowl began with a touchdown.

A steady rain forced the teams to commit 4 first-quarter turnovers, and Hunter Smith mishandled the snap on the extra point, allowing the Bears to maintain a 7-6 lead. Later in the quarter, Thomas Jones' 52-yard run set up Rex Grossman's short touchdown pass to Muhsin Muhammad for a 14-6 lead. The Colts scored on back-to-back drives to begin the second quarter, capped by Dominic Rhodes' 1-yard run, for a 16-14 lead.

To begin the second half, the Colts ran 7:34 off the clock with a 13-play, 56-yard drive that culminated with Adam Vinatieri's 24- yard field goal for a 19-14 lead. The teams then exchanged field goals, and the Bears forced a punt. On first-and-10 from the Bears' 38 with 11:59 to play, Grossman's pass intended for Muhammad was thrown high. Kelvin Hayden intercepted the pass, maneuvered up the sideline while staying inbounds, and raced 56 yards for a touchdown. It was Hayden's first-ever professional interception. Four plays later, Bob Sanders intercepted Grossman's deep pass.

The Bears got the ball back twice, but never ran a play across midfield.

For the Colts, Peyton Manning was 25 of 38 for 247 yards and 1 touchdown, with 1 interception. Rhodes rushed for 113 yards and a touchdown, while also catching an 8-yard reception. Joseph Addai rushed for 77 yards and caught 10 passes for 66 yards. Wilkins returned four kickoffs for 89 yards and 3 punts for 42 yards. Adam Vinatieri became the first kicker ever to play in five Super Bowls and the first to win four Super Bowl rings. Vinatieri's three field goals and two extra points gave him a total of 49 points for the entire 2006 post-season, an NFL record.

Thomas Jones was the Bears top rusher with 112 yards, while also catching four passes for 18 yards. Desmond Clark was the Bears' top receiver with six receptions for 64 yards. Rex Grossman completed 20 of 28 passes for 165 yards and a touchdown, with two interceptions for a QB rating of 68.3. 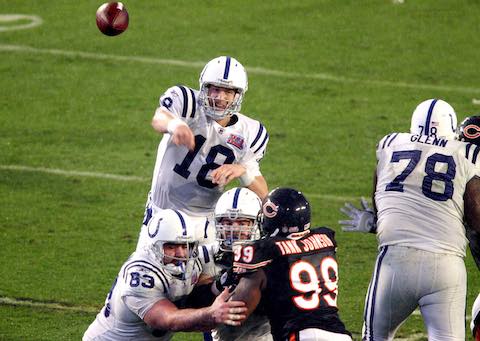 After more than a decade, Peyton Manning was finally able to shed the title of 'greatest QB to never win a Super Bowl' when he led the Colts to a 29-17 win over the Chicago Bears in Super Bowl XLI.

Peyton was 25 of 38 for 247 yards and a 53-yard TD pass to wide receiver Reggie Wayne in the first quarter, keeping the Bears on their heels with his play calling at the line of scrimmage as he rallied the Colts to a 29-17 victory. Indianapolis outgained Chicago 430 - 265 in total yards and maintained a 38:04 - 21:56 edge in time of possession.

After taking about a quarter to figure out the Bears' defense, Manning dissected it like a surgeon -- carefully and aggressively. He methodically moved Indianapolis by masterfully finding open receivers, calling runs and converting third downs. 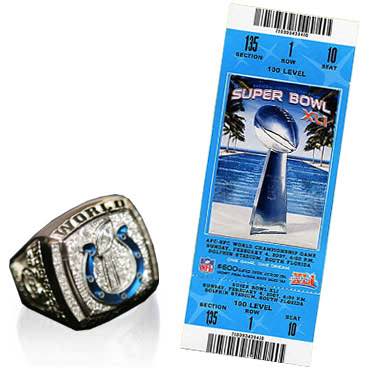