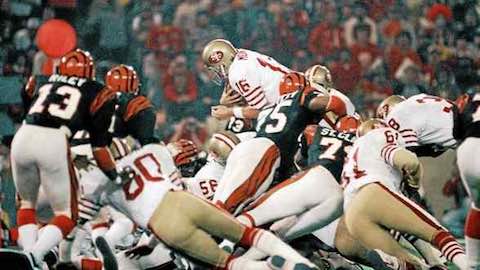 If the 1970s belonged to the Steelers, the 1980s was certainly the decade of the 49ers. This 26-21 win over the Bengals was the start of a San Francisco dynasty, with Montana (14 of 22, 142 yards) leading the way. In addition to an 11-yard scoring strike to Earl Cooper, Montana also ran for one score in the first quarter en route to a 20-0 halftime lead. Despite a serious comeback attempt by Ken Anderson and Cincinnati, Montana and the 49ers held on for the franchise's first Super Bowl title.

The Bengals rebounded in the second half, closing the gap to 20-14 on quarterback Ken Anderson's 5-yard run and Dan Ross's 4-yard reception from Anderson, who established Super Bowl passing records for completions (25) and completion percentage (73.5 percent on 25 of 34).

Wersching added early fourth-period field goals of 40 and 23 yards to increase the 49ers' lead to 26-14.

The Bengals managed to score on an Anderson-to-Ross 3-yard pass with only 16 seconds remaining. Ross set a Super Bowl record with 11 receptions for 104 yards.

Montana, the game's most valuable player, completed 14 of 22 passes for 157 yards.

Cincinnati compiled 356 yards to San Francisco's 275, which marked the first time in Super Bowl history that the team that gained the most yards from scrimmage lost the game. 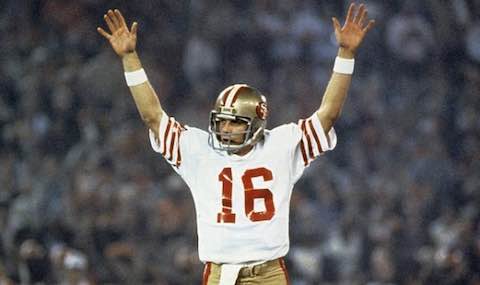 The 49ers' Super Bowl era began with this 26-21 victory over Cincinnati. Most Valuable Player Joe Montana led the way by throwing a touchdown pass, scoring on a short run and directing drive after drive through the Bengals' defense.

San Francisco's first score, a 1-yard run by Montana, came after an impressive 11-play, 68-yard drive early in the first quarter. Montana then led another drive of 92 yards -- a Super Bowl record -- on 12 plays, capped off by an 11-yard TD pass to running back Earl Cooper.

The 49ers added a pair of field goals to grab a then-record 20-0 halftime lead. Cincinnati came back in the second half, and San Francisco needed a key goal-line stand late in the third quarter to maintain its advantage. Montana continued to run the finely tuned 49ers offense, setting up two more field goals on the way to the victory. Montana completed 14-of-22 passes for 157 yards.

Halftime Show: Up with People presents "Salute to the 1960s and Motown" 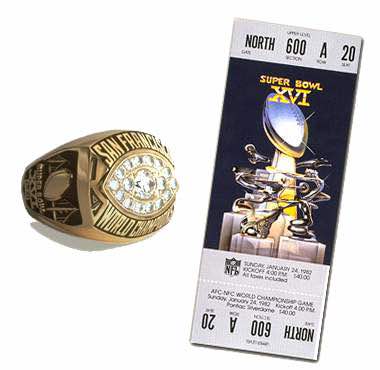