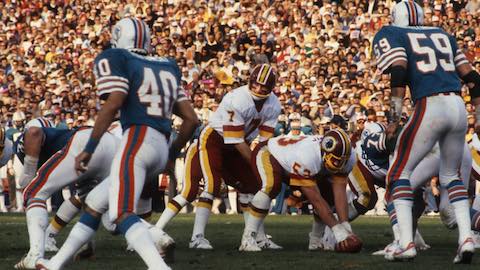 In front of a 100,000-plus crowd at the Rose Bowl in the Redskins 27-17 win over the Dolphins, Riggins turned in one of the most memorable rushing performances in NFL championship history. Highlighted by a bruising 43-yard touchdown run on a fourth and one situation, Riggins carried the ball a Super Bowl record 38 times for 166 yards.

In the process of wearing down a tough Miami defense, Riggins put an exclamation point on one of the most prolific postseason performances ever; the bruising back rushed for over 100 yards in each of Washington's four playoff victories.

The win marked Washington's first NFL title since 1942, and was only the second time in Super Bowl history NFL/NFC teams scored consecutive victories (Green Bay did it in Super Bowls I and II and San Francisco won Super Bowl XVI).

The Dolphins built a 17-10 halftime lead on a 76-yard touchdown pass from quarterback David Woodley to wide receiver Jimmy Cefalo 6:49 into the first period, a 20-yard field goal by Uwe von Schamann with 6:00 left in the half, and a Super Bowl-record 98-yard kickoff return by Fulton Walker with 1:38 remaining.

Washington had tied the score at 10-10 with 1:51 left on a 4-yard touchdown pass from Joe Theismann to wide receiver Alvin Garrett. Mark Moseley started the Redskins' scoring with a 31-yard field goal late in the first period, and added a 20-yard kick midway through the third period to cut the Dolphins' lead to 17-13.

Riggins, who was voted the game's most valuable player, gave Washington its first lead of the game with 10:01 left when he ran 43 yards off left tackle for a touchdown in a fourth-and-1 situation.

Theismann completed 15 of 23 passes for 143 yards, with two touchdowns and two interceptions. For Miami, Woodley was 4 of 14 for 97 yards, with one touchdown, and one interception. Don Strock was 0 for 3 in relief 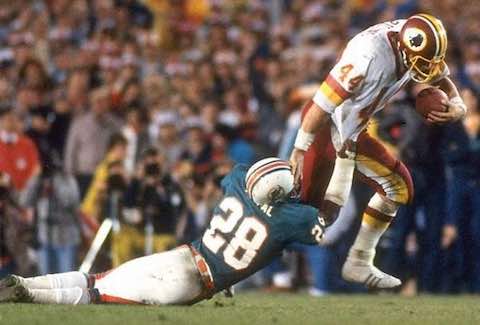 Down 17-13 in the fourth quarter of Super Bowl XVII and needing a big play, the Redskins turned once again to running back John Riggins, who had been making big plays for them all season. Washington faced a fourth-and-1 from the Miami 43. After taking a handoff, Riggins broke through the line and rumbled all the way for a touchdown to give Washington its first lead of the game. The Redskins went on to win 27-17.

The 43-yard run by Riggins, the game's Most Valuable Player, was immortalized in one of NFL Films's most memorable images. Coming straight toward the camera, the rugged running back fills the screen for several seconds as he chugs to a place in Super Bowl history. While helping Washington win its first NFL title since 1942, Riggins set a Super Bowl record with 166 yards on 38 carries.

The Super Bowl marked the end to one of the finest postseason rushing performances in NFL history. Riggins had rushed for more than 100 yards in each of the Redskins' four postseason victories. 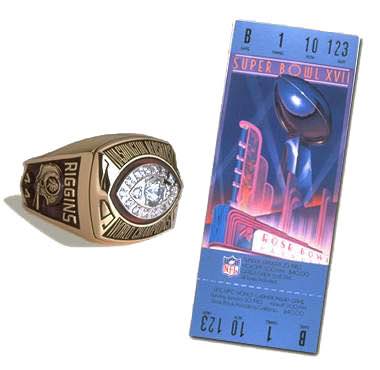