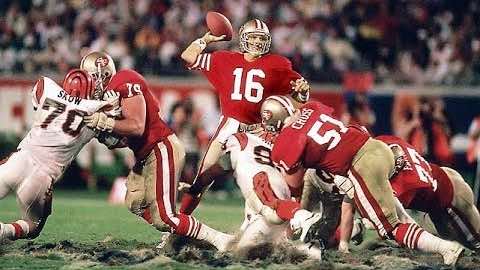 San Francisco became the first NFC team to win three Super Bowls in this epic come-from-behind win (20-16) over the Bengals. MVP Jerry Rice was unstoppable, reeling in 11 catches for a Super Bowl-best 215 yards.

49ers wide receiver Jerry Rice was unstoppable, reeling in 11 catches for a Super Bowl-best 215 yards. Though Joe Montana racked up more than 300 yards passing and directed the most memorable touchdown drive in Super Bowl history (92 yards in 11 plays), Rice's dominant performance was the difference in this game.

In addition to being the owner of every significant receiving record in NFL regular-season history, Rice still holds five Super Bowl records, including most career receiving yards and touchdowns.

Even though San Francisco held an advantage in total net yards (453 to 229), the 49ers found themselves trailing the Bengals late in the game. With the score 13-13, Cincinnati took a 16-13 lead on Jim Breech's 40-yard field goal with 3:20 remaining. It was Breech's third field goal of the day, following earlier successes from 34 and 43 yards.

The 49ers started their winning drive at their 8-yard line. Over the next 11 plays, San Francisco covered 92 yards with the decisive score coming on a 10-yard pass from quarterback Joe Montana to wide receiver John Taylor with 34 seconds remaining.

At halftime, the score was 3-3, the first time in Super Bowl history the game was tied at intermission.

After the teams traded third-period field goals, the Bengals jumped ahead 13-6 on Stanford Jennings's 93-yard kickoff return for a touchdown with 34 seconds remaining in the quarter.

The 49ers didn't waste any time coming back as they covered 85 yards in four plays, concluding with Montana's 14-yard scoring pass to Jerry Rice 57 seconds into the final stanza. 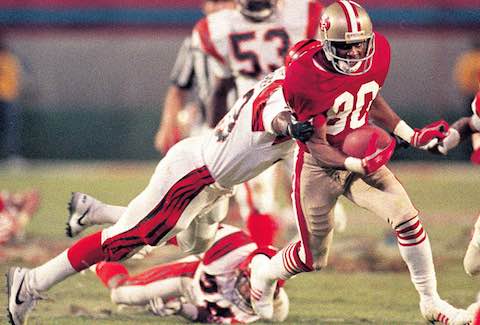 Even though Joe Montana racked up more than 300 yards passing and directed the most memorable touchdown drive in Super Bowl history (92 yards in 11 plays), Rice's dominant performance was the difference in Super Bowl XXIII.

Jerry Rice holds almost every career receiving record. It is only right that he also holds an important Super Bowl record.

His 215 receiving yards, on 11 catches, were a single-game best. Using Rice's talents and the most famous drive in Super Bowl history, the 49ers became the first NFC team to win three Super Bowls with their 20-16 victory over Cincinnati.

Following Stanford Jennings' kickoff-return touchdown that gave the Bengals the lead, Rice's 14-yard touchdown catch from Joe Montana tied the score at 13-13. A Jim Breech field goal with less than four minutes remaining gave Cincinnati the lead, but the 49ers one more shot. Moving 92 yards in 11 plays, including several key catches by Rice, the 49ers drove to the winning touchdown, a 10-yard pass from Montana to John Taylor. 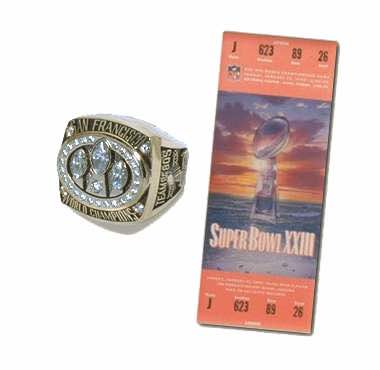