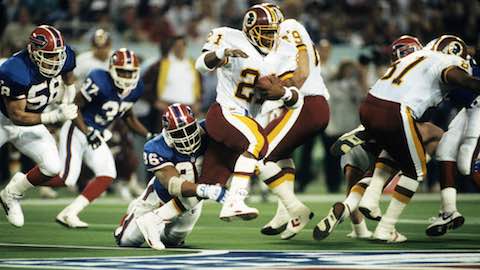 Mark Rypien and his Redskins handed the Bills their second Super Bowl loss (37-24), leading by as much as 37-10. Passing for 292 yards and two touchdowns, Rypien tallied more yards in his 33 attempts than did the Bills' Jim Kelly, who threw 58 times in the game. Rypien's 35-yard touchdown pass to Gary Clark in the second half provided some much needed breathing room for Washington.

Mark Rypien and his Redskins handed the Bills their second Super Bowl loss (37-24) to win their third Super Bowl in the 10 years at the time.

Passing for 292 yards and two touchdowns, Rypien tallied more yards in his 33 attempts than did Bills QB Jim Kelly, who threw 58 times in the game. Rypien's 35-yard touchdown pass to Gary Clark in the second half provided some muchneeded breathing room for Washington.

Rypien, the game's most valuable player, completed 18 of 33 passes, including a 10-yard scoring strike to Earnest Byner and a 30-yard touchdown to Gary Clark. The latter came late in the third quarter after Buffalo had trimmed a 24-0 deficit to 24-10, and effectively put the game out of reach.

Both teams entered the game as the two highest scoring teams in the NFL, but by the end of the first quarter the game remained scoreless due to miscues.

The opening kickoff had to be redone because Bills kicker Brad Daluiso kicked the ball before referee Jerry Markbreit signaled to begin play. Bills running back Thurman Thomas missed the first two plays of Buffalo's first drive because he couldn't find his helmet.

Later in the first quarter, Washington drove 89 yards and appeared to score a touchdown on a third-down pass from quarterback Mark Rypien to wide receiver Art Monk. But it was overruled by instant replay: the officials ruled that Monk's foot was out of bounds when he caught the ball (the first time a touchdown was overruled by instant replay in a Super Bowl). The Redskins tried to salvage the drive with a field goal attempt, but holder Jeff Rutledge fumbled the snap.

On Buffalo's first play after the botched field goal attempt, Bills quarterback Jim Kelly gave Washington another chance to score by throwing an interception to Redskins safety Brad Edwards, who returned it 21 yards to the Bills 12-yard line. But Rypien promptly gave it back to the Bills by throwing an interception to Bills defensive back Kirby Jackson on the third play of the Redskins' next drive.

In the second quarter, the Redskins began to take over the game.

First, a 41-yard completion from Rypien to wide receiver Ricky Sanders and a 19-yard run by Earnest Byner set up Chip Lohmiller's 34-yard field goal to give Washington a 3--0 lead. The Redskins' defense then forced Buffalo to a three-and-out on the ensuing possession, and punter Chris Mohr's 23-yard punt sailed out of bounds at the Washington 49-yard line. The Redskins then drove 51 yards in 5 plays capped by Byner's 10-yard touchdown reception. Then, on the Bills next drive, Washington defensive back Darrell Green intercepted a pass from Kelly at the Redskins 45-yard line. Three plays later, Rypien completed a 34-yard pass to wide receiver Gary Clark to the Buffalo 15-yard line. A 14-yard run by Ricky Ervins then set up fullback Gerald Riggs' 1-yard touchdown run to expand the Redskins' lead to 17--0.

Washington went on to lead by as much as 37-10 before the Bills made it close wih a pair of touchdowns in the final six minutes.

Though the Redskins struggled early, converting their first three drives inside the Bills' 20-yard line into only three points, they built a 17-0 halftime lead. And they made it 24-0 just 16 seconds into the second half, after Kurt Gouveia intercepted Buffalo quarterback Jim Kelly's pass on the first play of the third quarter and returned it 23 yards to the Bills' 2.

One play later, Gerald Riggs scored his second touchdown of the game to make it 24-0. Kelly, forced to bring Buffalo from behind, completed 28 of a Super Bowl-record 58 passes for 275 yards and two touchdowns, but was intercepted four tlmes.

Bills running back Thurman Thomas, who had an AFC-high 1,407 yards rushing and an NFL-best 2,038 total yards from scrimmage during the regular season, ran for only 13 yards on 10 carries and was limited to 27 yards on four receptions.

Clark had seven catches for 114 yards and Art Monk added seven for 113 for the Redskins, who amassed 417 yards of total offense while limiting the explosive Bills to 283. 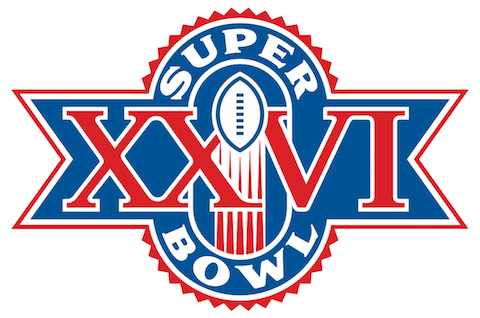 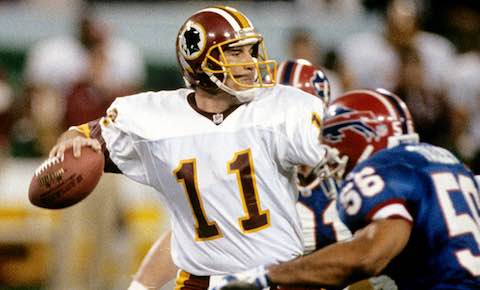 When you make it to the big game, it's time to have your biggest game.

Mark Rypien did just that for Washington as his passing and leadership guided the Redskins to their third Super Bowl title, a 37-20 victory over Buffalo. Rypien completed 18-of-33 passes for 292 yards and two touchdowns. 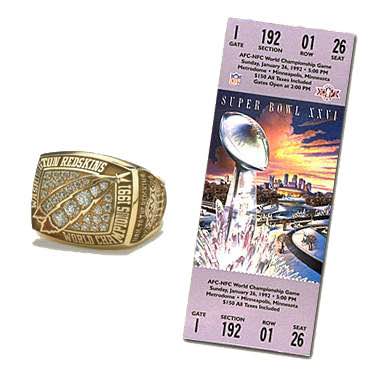