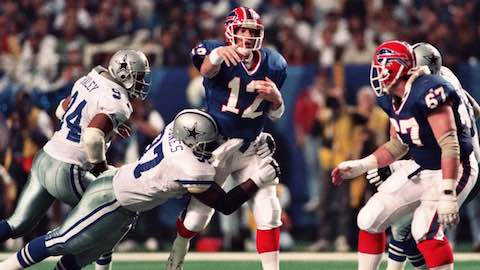 With Dallas trailing at halftime, it was Emmitt Smith's two second- half scoring runs that propelled the Cowboys to Super Bowl victory (30-13) for the second consecutive year over the rival Bills. Smith's first score gave Dallas the lead for good, as he carried the ball seven times on an eight-play scoring drive punctuated by a 15-yard touchdown scamper. Rushing 30 times for 132 yards, Smith's workmanlike effort helped stifle the Bills.

This was the first time that the same two teams met in consecutive Super Bowls. The defending Super Bowl XXVII champion Cowboys finished with a 12--4 regular season record, despite key players missing games due to injuries. The Bills were making their fourth consecutive Super Bowl appearance, but still seeking their first Super Bowl title, after also finishing with a 12--4 regular season record, largely through the strength of their no-huddle offense.

Even though the Buffalo Bills had a 13-6 lead at halftime, Super Bowl XXVIII would have an identical outcome as the three previous Super Bowls -- it would end with a Buffalo loss.

Emmitt Smith rushed for 132 yards and two second-half touchdowns to power the Cowboys to their second consecutive NFL title.

By winning, Dallas joined San Francisco and Pittsburgh as the only franchises with four Super Bowl victories.

The Bills, meanwhile, extended a dubious string by losing in the Super Bowl for the fourth consecutive year.

To win, the Cowboys had to rally from a 13-6 halftime deficit. Buffalo had forged its lead on Thurman Thomas's 4-yard touchdown run and a pair of field goals by Steve Christie, including a 54-yard kick, the longest in Super Bowl history.

But just 55 seconds into the second half, Thomas was stripped of the ball by Dallas defensive tackle Leon Lett. Safety James Washington recovered and weaved his way 46 yards for a touchdown to tie the game at 13-13. After forcing the Bills to punt, the Cowboys began their next possession on their 36-yard line and Smith, the game's most valuable player, took over.

He carried seven times for 61 yards on the ensuing 8-play, 64-yard drive, capping the march with a 15-yard touchdown run to give Dallas the lead for good with 8:42 remaining in the third quarter.

Early in the fourth quarter, Washington intercepted Jim Kelly's pass and returned it 12 yards to Buffalo's 34. A penalty moved the ball back to the 39, but Smith carried twice for 10 yards and caught a screen pass for nine, and quarterback Troy Aikman completed a 16-yard pass to Alvin Harper to give the Cowboys a first-and-goal at the 6.

Smith took it from there, cracking the end zone on fourth-and-goal from the 1 to put Dallas ahead 27-13 with 9:50 remaining. Eddie Murray's third field goal, from 20 yards with 2:50 left, ended any doubt about the game's outcome.

Smith had 30 carries in all, with 19 of his attempts and 92 yards coming after intermission. Washington, normally a reserve who played most of the game because the Cowboys used five defensive backs to combat the Bills' No-Huddle offense, had 11 tackles and forced another fumble by Thomas in the first quarter.

Dallas, the first team in NFL history to begin the regular season 0-2 and go on to win the Super Bowl, also became the fifth to win back-to-back titles, following Green Bay, Miami, Pittsburgh (the Steelers did it twice), and San Francisco.

Buffalo became the third team, along with Minnesota and Denver, to lose four Super Bowls.

The victory was the 10th in a row for the NFC over the AFC. 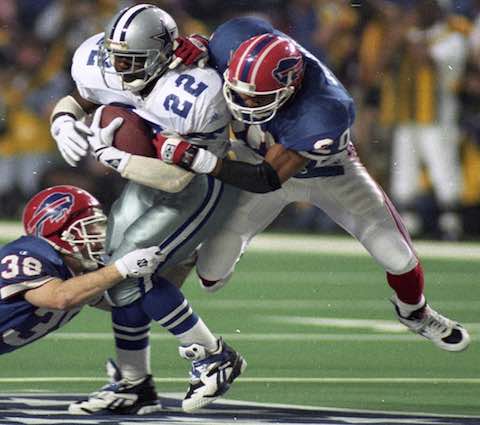 The Dallas Cowboys became the fifth team to win back-to-back Super Bowls, joining San Francisco and Pittsburgh as the only four-time champions.

Leading the way in its 30-13 victory over Buffalo was running back Emmitt Smith, who had 30 carries for 132 yards and two touchdowns. Smith's workmanlike effort helped stifle the Bills

Trailing 13-6 at halftime, Dallas tied the score on a James Washington fumble return. Then they turned the ball over to Smith, and he took it from there. Nineteen of his 30 carries came in the second half, as did both his touchdowns.

His first score, which gave Dallas the lead for good, came after an 8-play, 64-yard drive in which Smith carried the ball seven times. His 15-yard touchdown run capped off the drive. In the fourth quarter, he put the game on ice with a 1-yard touchdown run on fourth-and-goal.

Emmitt Smith, still suffering the effects of a shoulder injury during the regular-season finale, became just the second player in Super Bowl history to rush for 100 yards in back-to-back Super Bowls (the other being Larry Csonka in Super Bowls VII and VIII). Emmitt also became the fourth player to rush for touchdowns in back-to-back Super Bowls (joining Franco Harris, John Riggins and Thurman Thomas). Smith also became the first player to lead the NFL in rushing yards, win the NFL Most Valuable Player Award, and win Super Bowl MVP all in the same season. He was also the fourth player, after Bart Starr (1966), Terry Bradshaw (1978), and Joe Montana (1989) to win both the NFL MVP and Super Bowl MVP during the same season. 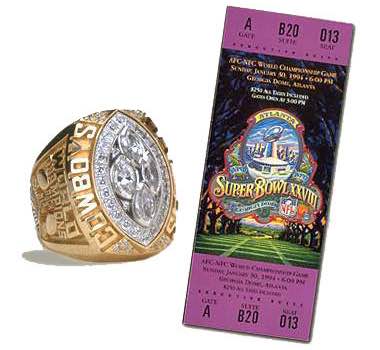