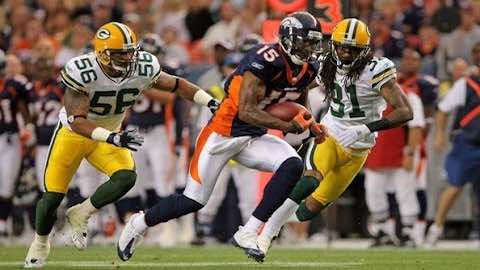 After leading the AFC in rushing in only his second year, Davis' 30 carries and 157 yards proved to be the difference in this 31-24 victory over quarterback Brett Favre and the Packers. The fleet-footed Davis utilized his unique combination of speed and power to become the first player in Super Bowl history to rush for three touchdowns in one game.

Terrell Davis rushed for 157 yards and a Super Bowl-record three touchdowns to lead the Broncos to their first NFL championship and break the NFC's streak of Super Bowl victories at 13.

Tyrone Braxton intercepted Favre two plays later, and John Elway scored on a third-and-goal play to begin the second quarter. Steve Atwater forced Favre to fumble three plays later, and Neil Smith recovered at the Packers' 33. Jason Elam converted a 51-yard field goal, the second longest in Super Bowl history, to give the Broncos a 17-7 lead with 12:21 left in the half.

After an exchange of punts, the Packers produced a 17-play, 95-yard drive that consumed 7:26 and finished with Favre's 6-yard touchdown pass to Mark Chmura on third-and-5 with 12 seconds left in the half.

Tyrone Williams forced and recovered Davis's fumble at the Broncos' 26 on the first play from scrimmage in the second half. However, the Broncos' defense kept the Packers out of the end zone as Ryan Longwell's 27-yard field goal tied the game with 11:59 left in the third quarter.

After another exchange of punts, Elway's 36-yard pass to Ed McCaffrey keyed a 13-play, 92-yard drive capped by Davis's 1-yard touchdown run with 34 seconds left in the third quarter. Tim McKyer recovered Freeman's fumble at the Packers' 22 on the ensuing kickoff return, giving the Broncos a golden opportunity, but Eugene Robinson intercepted Elway's pass in the end zone on the next play.

Sparked by Robinson's play, the Packers took just four plays, three on passes to Freeman, to score the tying touchdown with 13:32 remaining. Each defense stiffened, forcing two punts, but the Broncos got great field position following Craig Hentrich's 39-yard punt to the Packers' 49 with 3:27 left and the score tied 24-24.

Davis rushed for two yards on the first play, but Darrius Holland's 15-yard facemask penalty moved the ball to the Packers' 32. Elway threw a 23-yard pass to Howard Griffith two plays later, and after a holding penalty, Davis rushed 17 yards to the Packers' 1 with 1:47 left. After a timeout, Davis waltzed into the end zone to give Denver a 31-24 lead with 1:45 remaining.

Freeman returned the kickoff 22 yards to the Packers' 30, and Favre completed 22- and 13-yard screen passes to Dorsey Levens to reach the Broncos' 35 with 1:04 left. But after a 4-yard pass to Levens and incompletions to Freeman and Brooks, John Mobley knocked away Favre's pass to Chmura with 32 seconds left to give the Broncos the Vince Lombardi Trophy.

Elway was 12 of 22 for 123 yards, with an interception. Favre was 25 of 42 for 256 yards and a touchdown, with one interception. Freeman had nine receptions for 126 yards. Davis was named the game's most valuable player. 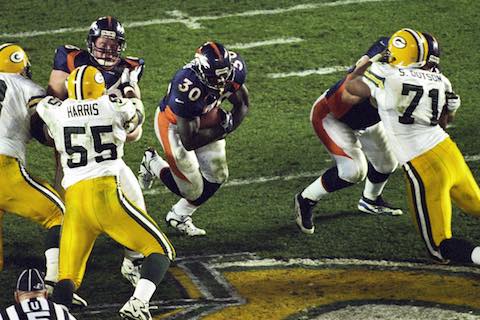 John Elway had waited 15 years -- not to mention his entire life -- for this moment. And when the Super Bowl XXXII Championship was finally his, it turned out that he, the player the Broncos had relied on to bring them victories ever since he joined the franchise, was not the player who brought them victory. That distinction went to running back Terrell Davis and with it, the Super Bowl XXXII MVP award.

After rushing for over 1,500 in his second season, he began the 1997 campaign as a man on a mission. Davis, along with Dolphins running back Karim Abdul-Jabbar, led the league with 15 rushing touchdowns. His 1,750 rushing yards led the AFC and were second only to Lions running back Barry Sanders' 2,053. He was also second in the league with 369 carries.

Davis carried that momentum deep into the postseason. When Denver hosted the AFC Wildcard Playoff Game against the Jacksonville Jaguars, Davis set franchise records with the most carries (31), rushing yards (184) and rushing touchdowns (2). Then, against the Kansas City Chiefs, the 1997 AFC West champions, Davis accounted for both Bronco touchdowns. His 101 yards on 25 carries vaulted Denver to a 14-10 victory and into AFC Championship game against the Steelers in Pittsburgh.

Despite the hostile environment, Davis posted his third straight 100-yard game. On 26 carries, Davis ran up 139 yards and added his fifth postseason touchdown of 1997. His effort launched him into second place for most rushing yards in a single postseason.

Finally, in Super Bowl XXXII, Davis capped one of the most remarkable seasons ever with a 157-yard, three-touchdown performance to help lead the Broncos past the Green Bay Packers for the World Championship. His third touchdown gave the Broncos a 31-24 lead, which they would never relinquish. The effort was more than enough to earn him the Most Valuable Player Award.

So while the press devoted most of their time to Elway, who had finally reached the ultimate pinnacle, Terrell Davis was the true hero of Super Bowl XXXII. 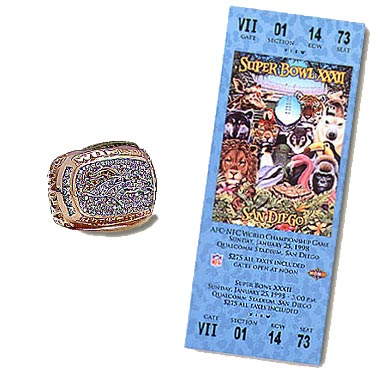