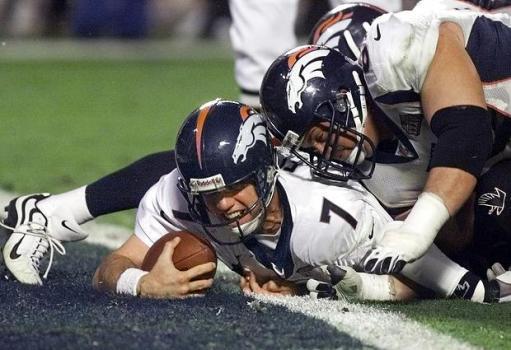 After waiting so long for his first Super Bowl ring, Elway wasted no time in adding a second one to his collection. Elway amassed 336 yards in Denver's 34-19 win over a Falcons squad led by powerful halfback Jamal Anderson. A member of the famed Class of '83 quarterbacks, Elway walked away from football after winning his second Super Bowl, ending on the highest of notes.

Aided by quarterback John Elway's 80-yard touchdown pass to receiver Rod Smith, Denver scored 17 consecutive points to build a 17--3 lead in the second quarter from which Atlanta could not recover. At 38 years old, Elway became the oldest player, at the time, to be named Super Bowl MVP (Tom Brady became the oldest in 2017 at the age of 39). In the final game of his career, Elway completed 18 of 29 passes for 336 yards with one touchdown and one interception, and also scored on a 3-yard rushing touchdown. The Broncos became the first AFC team to win consecutive Super Bowls since the Steelers won Super Bowl XIII and Super Bowl XIV.

Ronnie Bradford's interception and return to the Broncos' 35 late in the first quarter gave Atlanta excellent field position. However, Jamal Anderson was stopped for no gain on third-and-1 and thrown for a 2-yard loss on fourth down. Denver capitalized on its defensive effort with Jason Elam's 26-yard field goal.

The Falcons responded by driving to the Broncos' 8, but Andersen's 26-yard field-goal attempt sailed wide right and on the next play, Elway fired an 80-yard touchdown pass to Smith to turn a possible 10-6 game into a 17-3 Broncos lead.

Andersen's 28-yard field goal and two misses by Elam on the Broncos' first two second-half possessions gave Atlanta an opportunity to climb back into the game. However, Darrien Gordon dashed the Falcons' hopes with interceptions on consecutive possessions inside the Broncos' 20 to stop drives and set up Broncos touchdowns.

Gordon returned the first interception, on a tipped pass, 58 yards to the Falcons' 24 to set up Griffith's second touchdown five plays later, and picked the second pass off at the Broncos' 2 and returned it 50 yards.

Terrell Davis turned a short pass into a 39-yard gain, and Elway scored two plays later to give Denver a 31-6 lead. Tim Dwight returned the ensuing kickoff for a touchdown, and, after a field goal by Elam, the Falcons' offense scored with 2:04 remaining on Chandler's 3-yard pass to Tony Martin.

Byron Chamberlain recovered the ensuing onside kick, but Tyrone Braxton recovered Anderson's fumble at the Falcons' 33 with 1:30 remaining to ice the game. The Falcons drove inside the Broncos' 30 seven times, but tallied just one touchdown and two field goals, throwing two interceptions, missing a field goal, and turning the ball over one time on downs during the other possessions.

Davis had 25 carries for 102 yards. Smith had five receptions for 152 yards. Chandler was 19 of 35 for 219 yards and a touchdown, with three interceptions. 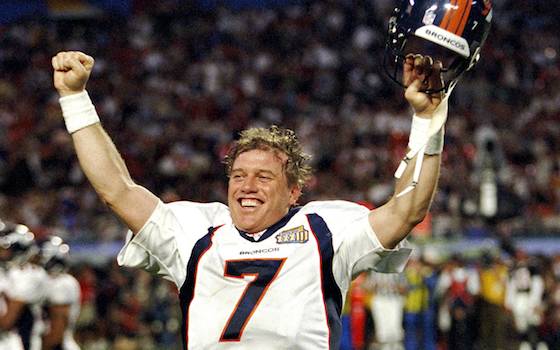 French explorer Ponce de Leon searched years for the Fountain of Youth in South Florida. Too bad John Elway wasn't around then to show him where it was.

"It's amazing," the 38-year-old Elway explained Monday, a day after being named Super Bowl XXXIII's Most Valuable Player. "I was talking to (Miami Dolphins quarterback) Danny Marino the other night and I said, 'No wonder you're talking about playing three more years. You get down here in the sun and your bones feel pretty good.' "

The Denver quarterback showed the world exactly how good last night, throwing for 336 yards -- the third-highest total in Super Bowl history -- and a touchdown in the Broncos' 34-19 victory over the Atlanta Falcons. For his efforts, Elway was awarded the MVP trophy.

"I really never thought I'd be standing here the morning after the Super Bowl as the MVP," Elway said. "It's really one of the great thrills of my career and something I'll always remember."

Once he comes to, that is.

"I still feel like this morning is last night," Elway admitted. "I haven't had a chance to lay down and change days yet. It's still Sunday to me."

Should Elway decide to come back and play a 17th NFL season, he would have the opportunity to win three championships in a row -- something that has never been accomplished. For that reason, perhaps, Elway has left the door open for his return.

"As I've said all year, there's a 90 percent chance I'm going to quit," Elway said. "The last thing I want to do is shut the door. I don't want to say I'm done and then get into March or April and say I can go one more year. So I want to take the time to do that and not close the door.

"The thing I know is the way the game's going, you can't start in July and expect to have a good year. The season starts in April. It's a nine-month job. So I have to have a good idea, my mind's got to be set by April."

"I don't want to come back and just go through the motions. If I come back it's going to be full bent trying to repeat."

In addition to the trophy, Elway was awarded a brand new 1999 Ford Expedition, passing up a Mustang. 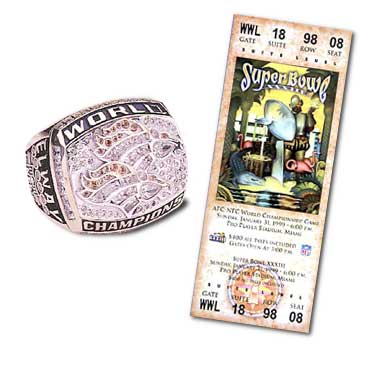