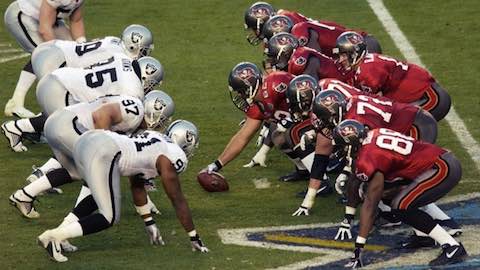 A bevy of Bucs defenders were worthy of MVP consideration, but Dexter Jackson's two first-half interceptions, one of which led to a go-ahead field goal, were the deciding factor in his selection. Cornerback Dwight Smith returned two INTs for scores in the fourth quarter, but Jackson's big plays keyed the Bucs 48-21 win over the Raiders in uper Bowl XXXVII.

Charles Woodson intercepted Brad Johnson three plays into the game to give Oakland the ball at the Buccaneers' 36. But Simeon Rice sacked Rich Gannon on third down to force the Raiders to settle for Sebastian Janikowski's 40-yard field goal.

On their next nine possessions, the Oakland Raiders registered just two first downs and did not run a play inside the Buccaneers' 40 as Tampa Bay scored the next 34 points. The Buccaneers answered Janikowski's field goal with Martin Gramatica's 31-yard boot to tie the game.

An interception by Dexter Jackson set up Gramatica's go-ahead field goal early in the second quarter. Midway through the second quarter, a 25-yard punt return by Karl Williams and a 19-yard run by Michael Pittman led to Mike Alstott's 2-yard touchdown run.

Late in the half, the Buccaneers drove 77 yards, aided by three defensive penalties and pass receptions of 16 and 12 yards by Alstott, to set up Brad Johnson's 5-yard touchdown pass to Keenan McCardell with 30 seconds left in the half, which gave Tampa Bay a 20-3 lead.

With their first possession of the second half, the Buccaneers put together a 14-play, 89-yard drive that consumed 7:52 and was culminated by Johnson's 8-yard scoring toss to McCardell. Two plays later, Dwight Smith intercepted Gannon's pass and returned it 44 yards for a touchdown and a 34-3 lead with 4:47 left in the third quarter. Tampa Bay scored four touchdowns in a span of 16:37.

Jerry Porter's 39-yard touchdown catch in the back of the end zone made it 34-9. Less than three minutes later, Tim Johnson blocked Tom Tupa's punt. Eric Johnson caught the ball and dove into the end zone for a touchdown to cut the deficit to 34-15 with 14:16 remaining.

The Buccaneers drove deep downfield again, but Tupa mishandled the snap for a field-goal attempt, allowing the Raiders to regain possession. Gannon hit Jerry Rice with a 48-yard touchdown pass with 6:06 left to trim the lead to 34-21.

A 9-yard pass by Johnson to Alstott on third-and-7 allowed Tampa Bay to take another two minutes off the clock before Tupa punted with 2:44 remaining.

Jackson, who had the first two interceptions, one of which led to the go-ahead field goal, was named the game's most valuable player. 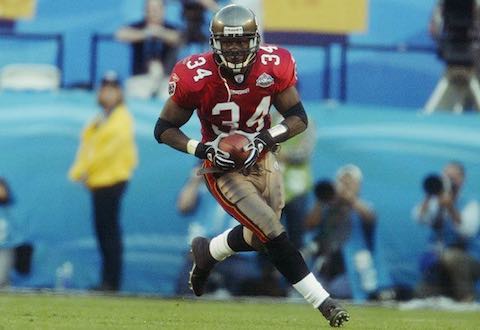 A bevy of Bucs defenders were worthy of MVP consideration, but Jackson's two first-half interceptions, one of which led to a go-ahead field goal, were the deciding factor in his selection. Cornerback Dwight Smith returned two INTs for scores in the fourth quarter, but Jackson's big plays keyed the outcome of the game.

America, say hello to Dexter Jackson, the Most Valuable Player of Super Bowl XXXVII. The Tampa Bay Buccaneers free safety won the award after intercepting two Rich Gannon passes in the first half -- a Super Bowl record -- as the Buccaneers rolled to a 48-21 victory over the Oakland Raiders.

But that was only one premonition.

Jackson himself predicted that he had a good chance to be the game's MVP during the seemingly endless pregame buildup.

"My friends were watching ESPN and they were picking their MVPs," Jackson said. "I hadn't even played the game yet, and I figured that I could be the difference. I told somebody that I was going to be the Most Valuable Player.

"We knew that Gannon loves to throw the football, so we knew there was a chance to make some big plays."

Nickel back Dwight Smith had two interception returns for touchdowns and the defensive line continually harassed Gannon, who finished the game with a 48.9 passer rating. Linebacker Derrick Brooks also had an interception return for a touchdown, so the decision was a tough one for the voters.

"As far as I am concerned, the whole defense could have won the award," defensive coordinator Monte Kiffin said.

The interception returns by Smith and Brooks were merely icing on the cake for a game that quickly turned into a blowout, despite a desperate comeback attempt by the Raiders. It was Jackson's interceptions that really turned the game in the Buccaneers' favor.

"That was big," Smith said. "Any time you can make Rich Gannon make a mistake, it's big. Dexter's first two interceptions really helped the momentum. My interception just sealed the deal. That's usually what our defense does. We make the plays that seal the game."

Jackson's first interception came late in the first quarter. Darrien Gordon had given the Raiders good field position near midfield with a 17-yard punt return. On third down, Jackson intercepted Gannon's pass for tight end Doug Jolley, who seemed out of position on the play.

"They had three receivers on one side and one on the backside," Jackson said. "They tried to flood one side and get [Jolley] matched up with our safety. They were trying to get John Lynch , so I went over and picked it off."

Martin Gramatica's 43-yard field goal culminated the nine-play drive, which put the Buccaneers on top 6-3 -- a lead they would never relinquish.

On the very next possession, Jackson victimized Gannon again, and the Buccaneers roared to a 20-3 halftime lead. For Jackson, being named Most Valuable Player was validation for the secondary.

"We had the No. 1 defense and nobody gave us any credit," Jackson said. "We felt like we were one of the strong points of the team. We just didn't get any attention.

When Jackson first came to the Buccaneers, he was affectionately nicknamed "Dirt Road" in honor of his rural hometown of Quincy, Fla. As Super Bowl MVP, he will take home the Cadillac of his choice -- spark plugs and all.

Jackson was a highly touted quarterback recruited to Florida State, looking to become the next Charlie Ward, who won the Heisman Trophy and led the Seminoles to a national championship. Jackson was a blue-chip quarterback listed with the likes of Donovan McNabb , Shaun King, and Daunte Culpepper , but switched to defensive back after looking at the competition, which included future NFL quarterback Danny Kanell.

Jackson's college career ended on the wrong side of the Fiesta Bowl as Tennessee defeated Florida State to win the national championship. While he couldn't bring a national title to his home state, he has brought home a Lombardi Trophy, along with his MVP award.

"This is terrific," Jackson said. "It's unexplainable to be the Super Bowl MVP. It's a great time for the whole state of Florida." 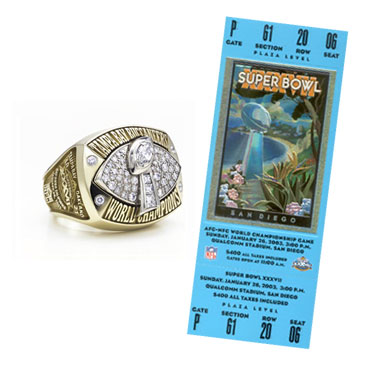