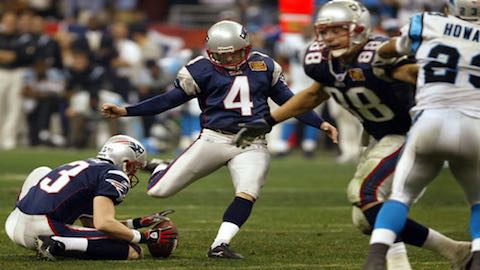 Tom Brady's Patriots treated the fans to another exciting finish that ended with a game-winning Adam Vinatieri field goal with four seconds remaining to edge Carolina, 32-29. The Michigan product completed 32 of 48 passes for 354 yards and three touchdowns to become the first quarterback in Super Bowl history to start and win two Super Bowls before his 27th birthday

NFL fans and sports writers widely consider Super Bowl XXXVIII one of the most well-played and thrilling Super Bowls. Sports Illustrated writer Peter King hailed it as the "Greatest Super Bowl of all time."

While it took a Super-Bowl record 26 minutes and 55 seconds for the first points to be scored, the teams combined for 868 yards (481 by New England) and the game also featured the highest scoring quarter (combined 37 points in the fourth).

Vinatieri missed a 31-yard field goal on the Patriots' first possession, and had a 36-yard attempt blocked by Shane Burton with 6:00 left in the second quarter. But three plays later, Mike Vrabel sacked Jake Delhomme and forced him to fumble. Richard Seymour recovered at the Panthers' 20, and a 12-yard scramble by Tom Brady on third-and-7 set up his 5-yard touchdown pass to Deion Branch with 3:05 left in the first half.

The Panthers responded with an 8-play, 95-yard drive capped by Delhomme's 39-yard perfectly placed touchdown pass to Steve Smith with 1:07 left in the half. Delhomme beat the blitz by lofting the pass deep down the left sideline.

Brady's 52-yard pass to Branch with 37 seconds left in the half set up David Givens' 5-yard touchdown catch with 18 seconds left. New England squibbed the ensuing kickoff and Kris Mangum returned it 12 yards to the Panthers' 47. A 21-yard run by Stephen Davis set up John Kasay's 50-yard field goal as the half expired for a 14-10 New England lead.

Neither team scored in the third quarter, but Antowain Smith's 2-yard touchdown run two plays into the final quarter capped a 71-yard drive and gave the Patriots a 21-10 lead.

Undaunted, the Carolina Panthers scored on their next two possessions.

First, Delhomme completed passes of 18 and 22 yards to Smith to set up DeShaun Foster's 33-yard touchdown run to cut the deficit to 21-16 with 12:39 to play. Carolina went for the 2-point conversion, but Delhomme's pass was incomplete.

New England marched to the Panthers' 9 with the ensuing kickoff, but Reggie Howard intercepted Brady's third-and-goal pass in the end zone. Two plays later, Delhomme rolled left and fired a Super-Bowl record 85-yard touchdown pass to Muhammad for a 22-21 lead with 6:53 left. Once again, the Panthers went for 2 points and Delhomme's pass was incomplete.

New England drove 68 yards on its next possession, with Givens catching a 25-yard pass and 18-yard pass on third-and-9, to set up Brady's 1-yard touchdown pass to Vrabel, who was lined up as a tight end. A direct snap to Kevin Faulk resulted in a 2-point conversion for a 29-22 lead with 2:51 left.

Delhomme completed passes of 19 yards to Muhammad and 31 yards to Ricky Proehl before finding Proehl from 12 yards with the tying touchdown with 1:08 remaining.

Kasay's ensuing kickoff went out of bounds, giving New England the ball at their own 40. Five plays later, faced with third-and-3 from the Panthers' 40 with 14 seconds left, Brady fired a 17-yard pass to Branch to set up Vinatieri's Super Bowl-winning 41-yard field goal.

Delhomme finished the game with 16 completions out of 33 attempts for 323 yards, three touchdowns, and no interceptions for a passer rating of 113.6. He was seen standing on the field during the Patriots' post-game celebration; he later commented: "I wanted to catch up to the moment of what it feels like to be on the other side, to be on this side, the losing side. To let it sink in, to hurt, so when we start practice in the fall, the two-a-days and there are days during the season when I'm tired and I want to go home, but I need to watch that extra film. I want to get back there, but I want to get on the other side of that field. They rope you off, the losing team basically. I just want to get on the other side of that rope. I just wanted to watch and let it sink in and hurt a little bit. When I have a tough day, I'll just think about that feeling and it will make me dig down just a little deeper."

Tom Brady, who was named the Super Bowl most valuable player for the second time in his career, was 32 of 48 for 354 yards and 3 touchdowns with 1 interception. Branch had 10 receptions for 143 yards.

Tom Brady's 32 completions were the most in Super Bowl history. His 48 attempts were the most for a winning quarterback. His 354 yards passing is now the fifth best total in Super Bowl history. Brady's passer rating for this game was 100.5. Branch was the top receiver of the game with 10 receptions for 143 yards and a touchdown. Brown caught 8 passes for 76 yards, and returned four punts for 40 yards. Antowain Smith was the top rusher of the game with 83 yards and a touchdown. 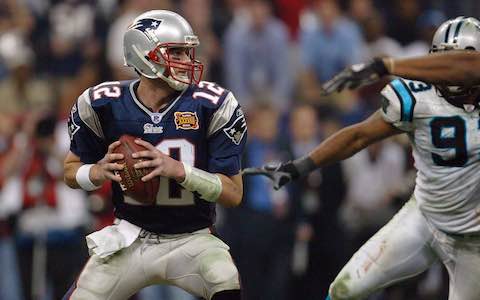 Can there be any doubt now that Tom Brady is one of the great quarterbacks in NFL history?

I don't think so.

Think about how incredible that is. It's the sort of stuff that has elevated players to Pro Football Hall of Fame status. And the kid is only 26 years old.

Yet, once again, Brady was so cool and so poised beyond his years. He was everything a top-notch, championship-level quarterback needs to be.

You could base that opinion on Brady's numbers alone: 32 completions in 48 attempts for 354 yards and three touchdowns. The 32 completions broke a Super Bowl record that Jim Kelly had set at 31 in Super Bowl XXVIII against Dallas.

But Brady's excellence went well beyond numbers. For the second time in three Super Bowls, he came through in the most pressure-filled of situations one can face in football -- or in any sport for that matter.

For one thing, he did not lose his cool after suffering an interception in the end zone that allowed the Panthers to make a stunning, 90-yard scoring march that gave them their first lead of the game -- 22-21 -- with 6:53 left in the fourth quarter.

For another, when the Patriots got a huge break when John Kasay sent a kickoff out of bounds that started them on their 40 with 1:08 remaining, he just tossed completion after completion against one of the NFL's best defenses. The 37-yard drive put them in position to score their 15th consecutive victory, which Adam Vinatieri delivered with his winning 41-yard field goal.

"Who would you rather have running a two-minute drive than Tom Brady?" Patriots offensive coordinator Charlie Weis said. "I'll take him 10 times out of 10 times."

Brady took some big hits, but never went down, giving the Patriots zero sacks for the postseason. He threw touchdowns to a pair of wide receivers, Deion Branch and David Givens, and to linebacker Mike Vrabel. He played like a champion and celebrated like a champion, giving credit, as usual, to everyone but himself.

"To win this, the way we did it, is just incredible," Brady said. "Just a great, all-around game."

But Brady deserves all of the credit he can get. He can be mentioned in the same sentence as some of the all-time greats, including his boyhood idol, Joe Montana.

Conventional wisdom suggested this game would be dominated by defense, and in the beginning it was. When the Patriots scored the game's first touchdown, with 3:05 left in the second quarter, it marked the latest first score in Super Bowl history.

But just when it seemed as if the Patriots had built an impenetrable wall in front of Carolina, Delhomme got hot. The Patriots ended up allowing three offensive touchdowns of 33 or more yards, including an 85-yard touchdown pass from Delhomme to Muhsin Muhammad that was the longest play from scrimmage in Super Bowl history.

Then Brady got a little hotter. And with the Super Bowl on the line for the second time in three years, he gave the Patriots the clutch work they needed.

"Tom's going to be mentioned with the better quarterbacks playing now and in the past," Patriots coach Bill Belichick said. "You can't deny his production. He's a winner. He does what he needs to do to help the team win, and he does it as well as anybody." 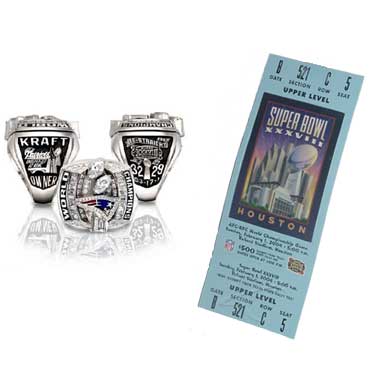