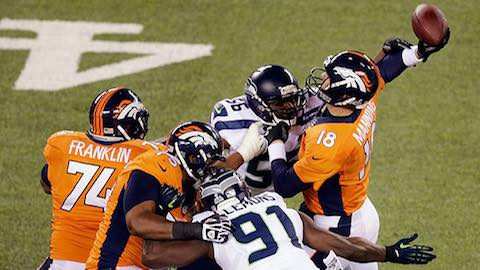 Russell Wilson completed 18 of 25 passes for 206 yards and two touchdowns while the defense forced four turnovers to help the Seahawks cruise to surprisingly easy win over the league's best offensive team for their first Super Bowl title.

Peyton Manning went 34-for-49 for 280 yards and a touchdown but he threw two interceptions and committed a fumble while the Broncos' running game was completely silenced, garnering just 27 yards on 14 rushes.

Demaryius Thomas set a new Super Bowl record with 13 catches for 18 yards and a score while Wes Welker finished with 84 yards on eight receptions for the Broncos, who left searching for their first Super Bowl victory since winning two straight in 1997 and 1998.

The Seahawks took an early 2-0 lead via safety after Manny Ramirez committed an error during a snap as Manning stepped out of his position in the shotgun to call an audible.

The ball dribbled into the end zone where Moreno smartly fell on it, limiting the damage to a couple of points.

Two field goals by Steven Hauschka from 31 and 33 yards gave the Seahawks an 8-0 lead before Kam Chancellor intercepted Manning's pass with 59 seconds left in the first period.

In the second, Wilson led a seven-play, 37-yard drive that Marshawn Lynch capped with a one-yard touchdown run.

With 3:36 left in the second, Malcolm Smith picked Manning's pass and returned it 69 yards for a touchdown and a 22-0 advantage.

The Seahawks opened the third with Percy Harvin's 87-yard kickoff return for a touchdown before Wilson found Jermaine Kearse for a 23-yard touchdown pass that gave the Seahawks a commanding 36-0 lead.

Manning finally put the Broncos with a six-play, 80-yard drive that he capped with a 14-yard touchdown pass to DeMaryius Thomas. The Broncos then completed a two-point conversion to cut the deficit to 36-8 heading into the fourth.

However, the Seahawks opened the fourth with five-play, 48-yard drive that Wilson ended with a 10-yard touchdown pass to Doug Baldwin for a 43-8 lead.

With their win, the Seattle Seahawks are now the 19th NFL franchise to win a Super Bowl title.

The Seahawks are the first team in Super Bowl history to score a safety, as well as touchdowns by rushing, passing, returning a kickoff and returning an interception. The Baltimore Ravens in winning Super Bowl XXXV did score touchdowns by those four methods, but they did not have a safety. Both teams also kicked field goals.

The opening safety after 12 seconds of play marked the fastest score in Super Bowl history. Peyton Manning was also on the opposing team of the previous fastest score. The 92-yard return of the opening kickoff by Devin Hester of the Bears took 14 seconds in Super Bowl XLI against Indianapolis (won by the Colts, 29-17).

The Seahawks also scored after exactly 12 seconds had elapsed in the second half. Percy Harvin's 87-yard kickoff return, the 10th in Super Bowl history, took that long.

Linebacker Malcolm Smith is the first defensive player to win Super Bowl MVP honors since Dexter Jackson of the Buccaneers in Super Bowl XXXVII, ending a streak of 10 straight quarterbacks or wide receivers.

It is the eighth time the defense has produced the Super Bowl MVP (nine players have won that honor with Randy White and Harvey Martin sharing the award for Dallas in Super Bowl XII).

Malcolm Smith did not intercept a pass in his first 43 games (regular season and professional). Beginning with the Week 16 game with Arizona, he is now on a run of four interceptions in his last five games. He is the first player ever to return an interception for a touchdown and recover a fumble in the same Super Bowl game. His 69-yard return was the 13th TD on an interception return in Super Bowl history (fourth-longest among scoring INT returns).

The NFC has now won four of the last five Super Bowls and leads the AFC, 26-22.

Russell Wilson of the Seahawks is 25 years and 65 days old today. He is the third-youngest starting quarterback to win a Super Bowl. Only Ben Roethlisberger in Super Bowl XL and Tom Brady in Super Bowl XXXVI were younger.

Wilson finished the game with a passer rating of 123.1, the ninth-best in Super Bowl history. Roethlisberger (22.6 in Super Bowl XL versus the Seahawks) and Brady (86.2 in Super Bowl XXXVI against the Rams) had lower ratings.

Denver's passing game produced Super Bowl records for quarterback Peyton Manning and wide receiver Demaryius Thomas. Manning's 34 completions surpassed the 32 completions of Tom Brady of New England in Super Bowl XXXVIII. On the other hand, his 5.71 yards per pass attempt was his second-lowest total of the season. With his touchdown catch in the fourth quarter, Demaryius Thomas set the Super Bowl record for receptions in a game and he added one more subsequently for a final total of 13. The previous mark of 11 was shared by four players, including Broncos teammate Wes Welker (New England, Super Bowl XLII).

Super Bowl XLVIII marked the first time any NFL game (regular season or postseason) had ended with a score of 43-8.

Broncos QB Peyton Manning finished his historic season with 6,387 passing yards and 60 TD passes (both figures including postseason). The 60 TD passes are a record for an extended season. Drew Brees of the Saints retains the passing yards record with 6,414 In 2011.

With 280 passing yards in Super Bowl XLVIII, Manning now has 6,589 in his postseason career - and has moved past Tom Brady (6,424) into first place on the NFL's all-time list.

The Seahawks are the first of the eight teams that now make up the NFC West and AFC West to win a Super Bowl since St. Louis won Super Bowl XXIV.

The Seahawks are the first team to win a Super Bowl in a season in which they had or shared the NFL's best record since the Patriots won Super Bowl XXXVIII over Carolina.

Super Bowl XLVIII marked the first time Peyton Manning had trailed by 29-plus points in a game since the 2002 Wild Card loss at the Jets which ended with Indianapolis losing, 41-0.

The Broncos entered Super Bowl XLVIII having scored at least 20 points in 24 consecutive games dating back to a 17-9 win over Kansas City on November 25, 2012.

They had scored at least 17 points in all 35 games since Peyton Manning joined the team at the start of 2012. Their last game in single digits was a 7-3 loss to Kansas City in the last regular season game of 2011.

There was a third time that a Super Bowl began with a safety, back in Super Bowl IX when Pittsburgh took a 2-0 lead over Minnesota. All three teams beginning the scoring with safeties have won their Super Bowl games.

The Seahawks needed only 18 completions to tie the Super Bowl record with nine different players making at least one reception.

The Seahawks are the 20th team to score first and never lose the lead en route to winning the Super Bowl. The Ravens also did so in Super Bowl XLVII.

The 27 rushing yards by the Broncos were the fifth-fewest in Super Bowl history - and the fewest since the Buccaneers held the Raiders to 19 in Super Bowl XXXVII.

The Seahawks won twice at MetLife Stadium this season, beating the Giants and Broncos by a combined score of 66-8. They forced a total of nine turnovers in those two games with seven interceptions.

With the win by the Seahawks, teams wearing white jerseys have won 9 of the last 11 Super Bowls.

Teams allowing the fewest points in the regular season have met teams scoring the most points in five Super Bowls. The team leading the NFL in points allowed has won all five.

Most Receptions, First Half: 7, Demaryius Thomas