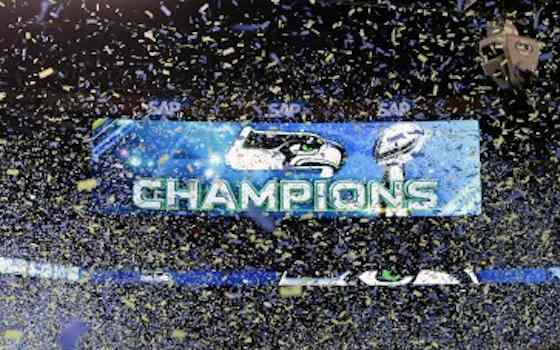 The banner at MetLife Stadium said it all (Corky Trewin, Seahawks)

For the Northwest sports fan, aggrieved after more than a third of of century of mediocrity, team departures and close-but-zippo shots at championships, the drama Sunday unfolded in an unexpected way: Quick, savage and relentless. That never happens in Seattle sports, which for so long has greeted the threat of success with something like, "You go ahead. We'll be fine."

For the Seahawks players, the drama unfolded in a different way: It was exactly as they planned. That happened almost all the time with this team this season.

"To be honest with you, a lot of the players on this team expected this to be a dominant win," said WR Doug Baldwin. "I say that with no disrespect to the Broncos. They probably thought that too; that's how you get to a championship game.

"But the way we were prepared the last two weeks, there was no doubt in my mind. You saw us dominate defensively, force the pace on the ground, then make plays in passing game."

They knew they would shred the Broncos. It was possible to sense some of it this week around the team. They were so calm, so certain. While the world blinked and stared in amazement at the MetLife Stadium scoreboard that read "Seahawks 43, Broncos 8," the Seahawks walked onto the biggest stage in the media and sports world as if they owned it down to the last row of klieg lights.

"It was not even a question in their minds," said coach Pete Carroll, "that we wouldn't perform like this."

On the first play, Denver center Manny Ramirez (apparently no relation) snapped the ball past quarterback Peyton Manning into the end zone for a safety. It seemed as if the Seahawks defense lined up and said, "Boo!"

"It was real loud -- none of us heard the snap count," a bewildered Ramirez said. "I thought I did, and when I snapped the ball, I guess Peyton was actually trying to walk up to me at the time. It kind of put us on a back end right off the bat."

It kind of did.

After 2-0, it was 5-0, then 8-0 and 15-0 before the Broncos finally got a first down five minutes into the second quarter. And this was the most prolific single-season offense in the history of the NFL.

Turned out they were fakes. Frauds. Manning couldn't throw a lick downfield and his receivers couldn't take a lick.

On the Broncos' second series, heralded receiver Demaryius Thomas caught a short crossing pass over the middle only to be clobbered back four yards by the chief boomer in the Legion of Boom, Kam Chancellor.

"We saw on film that they did most of their damage on yards after catch," Chancellor said. "We knew they were going to catch the ball, and we wanted them to know right away they had to deal with us."

The Broncos also had to deal with Percy Harvin right away. On the second scrimmage play, they ran a fly sweep play for Harvin that went for 30 yards after the blockers cleared most of New Jersey from his path. They used the play only one other time this season, but like the Chancellor hit, the Seahawks went with it early and hard to shock the Broncos into submission.

Given the respect with which Manning was held, it seemed too early to declare victory, but it was over after the first few series. Fans, viewers and advertisers who settled in for the drama the Super Bowl produced in recent seasons were left instead to ponder the immensity between the Seahawks and the rest of the NFL.

That was a tribute to Carroll, whose vision, enthusiasm and strategic skill directed a franchise to its first NFL championship, and the first in 19 years from a team in the Pacific time zone. And he did it in a town where he was fired 20 years earlier after a single season.

A teammate said Baldwin was so excited before the game that his gibberish couldn't be understood. He was asked to explain.

"This Super Bowl appearance has been building since we were seven years old, when we first started playing football," he said. "When you get to this game, and there's still so much doubt and negativity against you, you can't help but have that built up anger.

"What I was saying was we belong here, this is our opportunity. Our time. They owe us this opportunity to be in this position. But they weren't going to give it to us; we had to take it."

Take it? They nearly pulled the arms off the Broncos.

The Seahawks have had a quiet little slogan this season: Leave No Doubt.

As I made my way from interviews back to the press box through a stadium concourse near the locker rooms, a golf cart bearing Seahawks owner Paul Allen and his girlfriend started up to take him to his car.

Allen has owned the NBA Portland Trail Blazers since 1988, the Seahawks since 1997 and a part of the Sounders since 2009. He's never had the championship experience. Walking alongside, I offered my congratulations.

He looked up, managing a weary grin, and said, "It's an amazing feeling."

In Seattle, no sports fan under 40 and no one new to town in the empty years has known the feeling.

Get used to it.